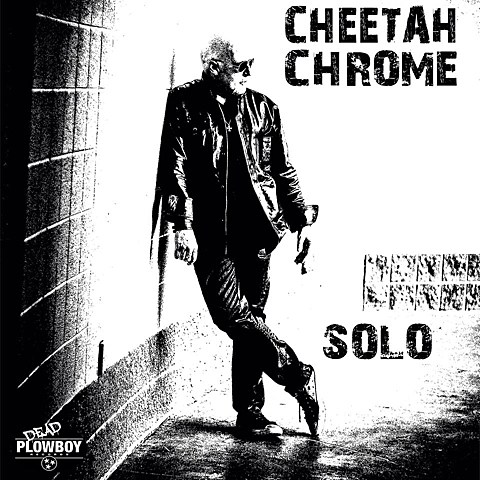 Cheetah Chrome, guitarist for legendary punk band The Dead Boys and pre-Dead Boys band Rocket From the Tombs (with whom he's reunited in recent years), is set to put out his first-ever solo release this week (10/8) via Plowboy Records, which he co-founded. Aptly titled Solo, the release is a 7-song EP that features songs from his 1996 "great lost solo album" (produced by Genya Ravan, executive produced by CBGB owner/Dead Boys manager Hilly Kristal), and from a 2010 session he did with New York Dolls guitarist Sylvain Sylvain when they teamed up for a collaborative project, The Batusis, which also featured The Cult's Lez Warner and Joan Jett & the Blackhearts' Sean Koos.

The EP's single is the jangly acoustic rocker "East Side Story," which you can stream (via USA Today), along with the tracklist below. That's the album artwork above.

The EP comes out the same day as the CBGB movie, which features Cheetah being played by Rupert Grint (Ron Weasley from the Harry Potter films) and a cameo by Cheetah himself. As discussed, that movie premieres at the CBGB Festival, where Cheetah will also be playing two full band shows.

In related news, 1975-1980 footage of the NYC punk scene, including clips of The Dead Boys, Iggy Pop, Richard Hell, Bad Brains, The Cramps and more, has been put together for the archive film, Nightclubbing, which just screened in NYC this past Friday (10/4). A description (in case you missed it) reads:

In the summer of 1975 on New York's Lower East Side, Pat Ivers and a group of like-minded videographers with borrowed cameras set out to capture as much of New York City's exploding punk music scene as possible. After an early disbanding of the original group, Ivers found a sole partner in Emily Armstrong and the two continued the project for a total of five years, capturing legendary performances at CBGB's, Mudd Club, Danceteria and elsewhere by iconic bands and artists such as Iggy Pop, Dead Boys, The Cramps and more. Ivers and Armstong continued filming until a 1980 arrest, along with the entire staff of the illegally operated Danceteria, convinced them to stop (the pair were quickly exonerated and freed).

There's an opening happening at NYU's Fales Library on October 17 at 7 PM, with a party and screening. More info here. Check out some excerpts from the archives below.

Speaking of Richard Hell, he just read from his recently released autobiography, I Dreamed I Was a Very Clean Tramp, at Basilica Sound Scape. A new article on Columbus Alive about that book reads:

Hell's telling of his life thereafter is unclouded by hyperbole. Straightforward, interestingly done weavings of story and description are littered with occasional punches of universal truths. He writes about his bands, his poetry, his struggle to make a life as an unrelenting artist even if he didn't call himself that at the time, his planting of the roots of punk-rock and his warranted frustration that the Sex Pistols just kind of lifted his attitude and style and took it all the way into the annals of popular rock history.

"There's a lot of talk of misogyny," Hell said about criticism he's faced since the book was released. "There's a lot of talk that I'm a terrible writer or that I'm a great writer. There's definitely a difference of mentality. Some people talk about how egotistical I am, others how honest or self-aware I am. ... But it was the truth. And that was what was important to me. To tell the truth as much as I could."

Richard Hell is also on the CBGB movie's soundtrack along with Dead Boys, New York Dolls, Television, and many more.

Cheetah Chrome EP tracklist and song stream, along with the 'Nightclubbing' excerpts, below...

Nightclubbing Opening from KG on Vimeo.