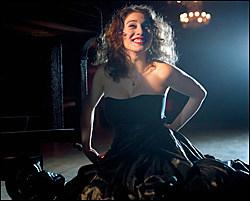 "On her new release (one of my favorite albums of the year), Begin to Hope, singer, songwriter and pianist Regina Spektor sings in her native Russian for the first time." [NPR]

"The Strokes, pals who famously gave Spektor her first big break by bringing her on tour as an opener, were among her inspirations. 'The thing that blew my mind first hearing the Strokes was that they were the closest I had heard rock come to classical,' she says. 'Their music is extraordinarily orderly and composed. It's almost like Mozart.' When 'Better,' Hope's first single, needed some oomph, Strokes guitarist Nick Valensi stepped in and lent the song its precise, driving kick." [Village Voice]

"A new film about Leonard Cohen does a remarkable thing: it gets him to talk. And what a pleasure it is. Here's Cohen, for example, on his long-standing reputation as a ladies' man - it was, he says, 'a joke. It caused me to laugh bitterly the 10,000 nights I spent alone.'" [Telegraph]