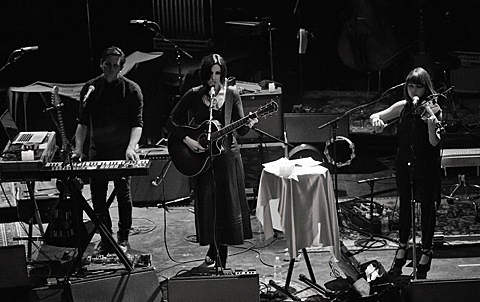 Chelsea Wolfe will follow 2013's Pain Is Beauty this summer with Abyss on Sargent House. The album has Chelsea joined by frequent collaborators Ben Chisholm, Dylan Fujioka, and Ezra Buchla, as well as Mike Sullivan of Russian Circles (whose last album she sings on) and D.H. Phillips of True Widow (who she's toured with). It was produced by John Congleton, who's worked with Cloud Nothings, Angel Olsen, Swans and more.

She hasn't put out a full song from it yet, but you can listen to a clip of "Iron Moon" in the album trailer. From the bit we've heard, it's as dark as Chelsea's best stuff, and has her distorted voice over borderline doom metal guitars. It's just a short clip, but it's making this album seem pretty exciting. Check it out below.