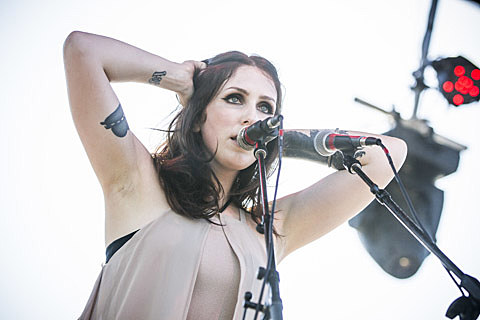 Chicago post-rock/post-metal band Russian Circles are set to release their fifth studio album, Memorial, on October 29 via Sargent House, and they've just revealed the album's title track. For this song, the instrumental band have tapped goth entrancer (and Sargent House labelmate) Chelsea Wolfe to provide lead vocals. It's a swirling, atmospheric cut that's more similar to Chelsea Wolfe's first two albums than most of Russian Circles' prior output. You can stream it (via Rolling Stone), along with another album track, "Deficit," below.

Chelsea Wolfe's own new album Pain Is Beauty is out now, and she's currently supporting it on a tour with the equally dark slowcore trio True Widow, whose new album Circumambulation is out now via metal label Relapse Records. Their tour hits NYC TONIGHT (9/13) at Bowery Ballroom, and Tickets for tonight's show are still available.

Speaking of Sargent House and Bowery Ballroom, three of the label's bands, Tera Melos, Fang Island, and Zorch are touring together this fall, and will play Bowery Ballroom on October 30. Tickets for that show are on sale now.