Mayor Bill looks down lovingly at his metal loving daughter... 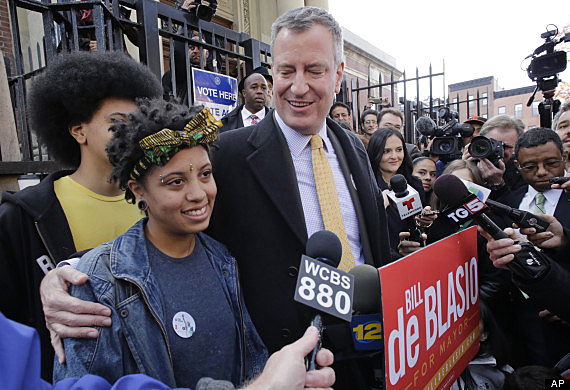 Attention Saint Vitus and other metal-centric NYC businesses, you may have an ally in the new mayor, or at least in his daughter! From a profile in Teen Vogue:

Her be-my-best-friend appeal doesn't end there. Like a true city kid, Chiara doesn't have her driver's license (yet) and loves going to concerts. Her music of choice? All metal everything: "Old school metal, thrash metal, death metal, the new wave of British heavy metal. In terms of more modern stuff, I've gotten into Scandinavian, folk, and Viking metal. Dante loves metal now too, thanks to me." No, she doesn't mosh (anymore, that is), and her taste only spreads out from there, from classic rock to the Wu-Tang Clan.

Viking metal?!? Chiara has done her research! How many people can get as specific as "new wave of British heavy metal"? I wonder if she reads Invisible Oranges. Too bad she's not 21 because she lives really close to metal bar Lucky 13 Saloon (though her drinking days may already be over).