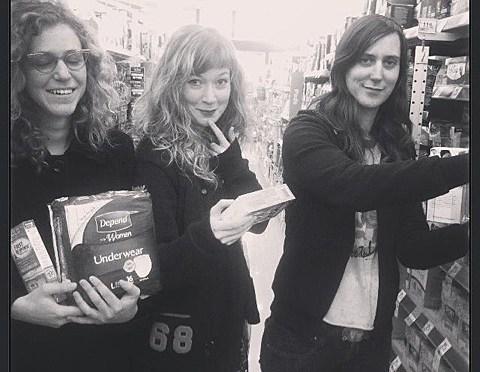 Seattle's Childbirth is made up of musicians from three bands who are known in (and to some extent, outside of) their local scene, Tacocat, Pony Time and Chastity Belt, but Childbirth themselves had been remaining relatively under the radar. That is until their excellent single "I Only Fucked You as a Joke" got some internet love this week. The song is as hilarious and biting as you'd want a song called "I Only Fucked You as a Joke" to be, but it's not novelty either.

The track appears on Childbirth's debut digital/cassette album, It's A Girl!, which came out last week (1/7) via Help Yourself Records. Other track titles on the album include "Menopause," "How Do Girls Even Do It?," and "Will You Be My Mom?" which probably give you a good idea of what you're getting from this record. And while it'd be easy to make comparisons to riot grrrl, Childbirth don't sound like they're trying to revive a two-decade old movement, they sound totally in the now. They sound like they've got similar DIY/punk/indie ethics that other great new bands like Speedy Ortiz and Potty Mouth are embracing, and they sound lyrically inspired to make a statement with each song, not just show off fancy influences. And humor and sarcasm are time-tested ways to make statements in punk songs. What would "Six Pack" and "TV Party" be without them?

You can purchase It's A Girl! over at bandcamp, and stream it, along with the video for "I Only Fucked You as a Joke," below...

Childbirth - "I Only Fucked You as a Joke"

Childbirth - It's A Girl!