CHIN UP CHIN UP (listen @ Myspace)

Pitchfork reports, "In addition to signing a deal with Seattle's hotshot Suicide Squeeze Records, Chin Up Chin Up recently announced that Jesse Woghin of the Narrator will serve as the full-time replacement for bassist Chris Saathoff, who was tragically killed by a drunk driver on February 14, 2004......The only Chin Up Chin Up live date scheduled at the moment is an appearance at the Suicide Squeeze showcase at SXSW, which will take place at Emo's on March 16. Joining them will be new labelmates Minus the Bear (minus keyboardist Matt Bayles, who recently departed the band to concentrate on being a producer), Crystal Skulls (sophomore album Outgoing Behavior due April 11), and Baltimore teenagers Metal Hearts (debut album Socialize due February 21)."

ONE PIC, TWO BANDS (from here) 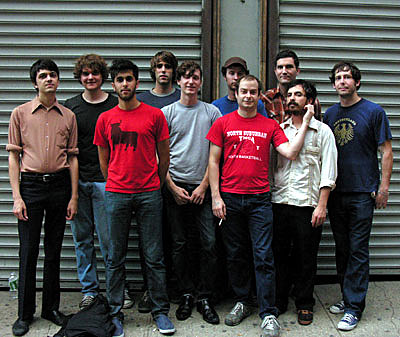 Voxtrot release an EP called Mothers, Sisters, Daughters & Wives on April 4th, or March 21st of you order it from their website. It'll "have 5 songs on it, 4 of which have been live staples in the band's set as of late".

And Voxtrot is going on tour again. They'll be at Mercury Lounge in NYC on April 10th (with Irving). All dates below...