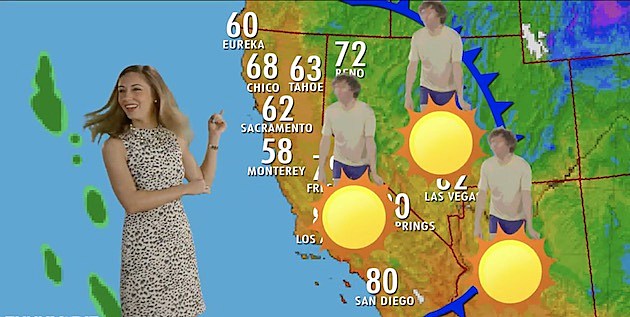 !!! (chk chk chk)'s song "Every Little Bit Counts," which is on last year's As If, is probably the closest the band have ever come to straight-up pop; an infectious, guitar-driven song that is a little like New Order at their frothiest (or maybe New Radicals). They've just released a video for the song which, like the one for "Ooo," was directed by Adult Swim's Casper Kelly, the guy behind viral sensation Too Many Cooks. For it, he casts !!! frontman Nic Offer as that guy who worms his way into the background of a street reporter's shot, but then infects himself into every part of the newscast. Says director Kelly:

"Every Little Bit Counts" excited me because it is such a fun, fun song and tonally different from the weirder, darker stuff I usually do. The basic idea is there's a stuffy world, in this case the news, and Nic comes in like Willie Wonka or the Cat in the Hat and has a bit of fun with it. Crazily and coincidentally, while shooting on the set Nic told me he once did a thing like this in real life - he was walking somewhere and there was a news crew interviewing a man opposed to gay marriage, and Nic popped in and said something in the mic. If someone by chance taped that newscast he'd love a copy.

Watch the "Every Little Bit Counts" video below.

The band will be on tour in Europe and the UK in February and March, and those dates are listed below.