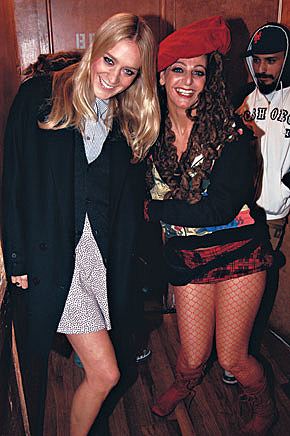 Cool chick Chloë Sevigny has loads of equally hip friends to call on when she decides to throw a party. But even she was surprised by the turnout at the bash she hosted at Webster Hall Monday night -- along with MAC Cosmetics, Self-Service Magazine and boutique Opening Ceremony -- to celebrate her debut collection for the store and featuring a special performance by British punk rock band The Slits. By the time she arrived around 10:30 p.m., there was a line snaking around the block, three deep with grungesters, alternative chicks and general misfits.

"Oh my God, did you see how many people are out there?" exclaimed Sevigny to Slits lead singer Ari-Up as they made their way backstage. "It's, like, thousands!"

"They're all here for you," replied the red fishnet-bedecked belter. (She might have had a point, as many of the Opening Ceremony posters of Sevigny plastered all over the venue were quickly ripped off walls by eager fans.)

It has been 20 years since the band last performed at Webster Hall. "We really changed music, the culture and clothes. We were 30 years ahead of everyone. We were the first to wear tutus with Doc Martens, and then Madonna started dressing like us," claimed Ari-Up of the quartet, which formed in 1976.

Though you wouldn't guess it from Sevigny's Liberty print-laden collection, the actress-designer claims to be quite inspired by The Slits. But don't expect to see them making fashion week appearances a regular activity. "We're more individual," declared keyboardist Hollie.