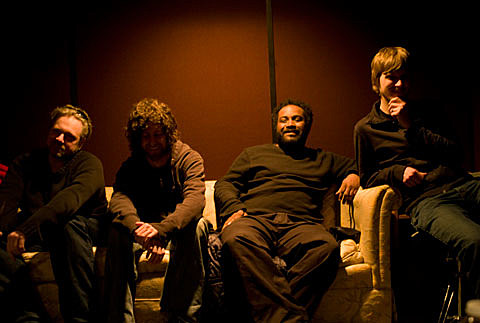 Trevor de Brauw of Pelican will be at Issue Project Room in Brooklyn on August 15th with Chord, his "powerambient" project devoted to dissection of the riff. It's their only current tour date and part of the killer Important Records showcase that the band is now playing in support of their upcoming LP Progression. The record, due on Important in early November, is the follow-up to Flora which hit via Neurot Recordings in 2009.

For the new album three single-chord compositions were charted out, one freeform and tone driven, one long-form piece with charts dictating the players' intensity of performance, and one grid-like chart where each players' note continually shifts, though the combination of voices continue to maintain the chord... Six chords were chosen and arranged in a progression that encompasses two separate performances of each of the three compositions. Though the CD and LP share a similar internal structure and can be listened on their own, they are intended to be played concurrently, forming the full six chord arc of the total piece.

CD and LP tracklistings, as well as a video are below. Dig on the first CD track above.

Chord - the mixing of Progression