Chris Brokaw at LPR in 2012 (more by Greg Cristman) 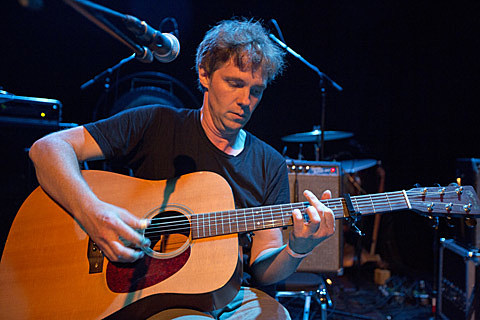 Chris Brokaw, of Come, Codeine and more, kicked off a solo tour in Chapel Hill last night (3/2), and he'll be coming to NYC for FOUR shows here. First, he'll open Bob Mould's Workbook shows at City Winery on March 7 & 8. In Chris' words, "Bob and I have shared stages together for over 20 years now (!?!) and it's always a great pleasure." Those are both sold out.

After that, he's got two not-sold-out headlining shows, including Union Pool on March 13 and Death by Audio on March 14. The Union Pool show is with DJ Jonathan Toubin and "VERY SPECIAL GUESTS" who Union Pool's site bills as "Bill O'Reilly Orgasm." The DbA show meanwhile, is with long-running guitar experimenter Jeff Barsky, aka Insect Factory, who will be collaborating with Chris at the show. Also on that bill is Parts & Labor's Dan Friel, Wavepool and 10000 Idiots. And the day after the DbA show Chris will play a TBA show in Scarsdale, NY which isn't too far from here in case four NYC shows isn't enough for you.

All dates are listed, with streams from Chris Brokaw and Insect Factory, below...