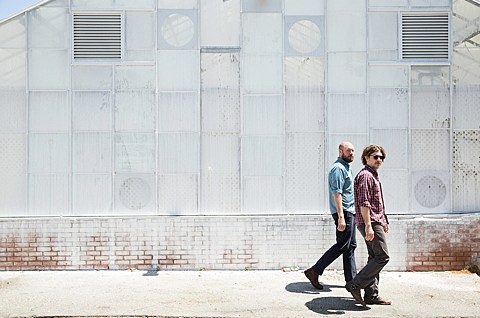 Chris Forsyth and Koen Holtkamp (of Mountains) released the collaborative album Early Astral back in 2011, and next week (10/16) they'll release their second and first for Trouble In Mind, The Island (pre-order). Chris' solo material often has him making full songs out of the kind of spacey guitar soloing that The Grateful Dead were known for, while Koen's deals more with droning ambience. For this project, the two musicians bring those two sounds together and the results turned out really well. Jeff Zeigler, who's worked with Kurt Vile, The War on Drugs and more, recorded it. Listen to "Cosmic Richard" and watch the video for "Long Beach Idyll" (premiering here) below.

Chris & Koen don't have any shows together coming up at the moment, but Chris Forsyth & the Solar Motel Band do. They're currently in the midst of an October residency at Ortlieb's in Philly, and after that they play two NYC shows. The first is opening for Futurebirds at Bowery Ballroom on November 12 (tickets) and the second is Trans-Pecos on December 12 (more info TBA). All dates are listed below.