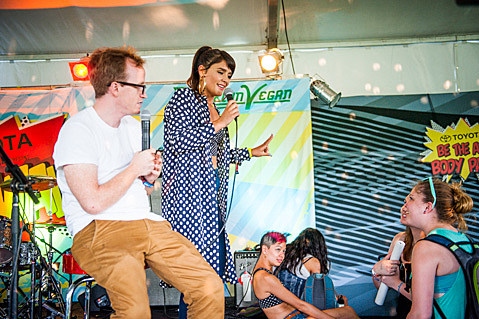 Comedian Chris Gethard has been working his ass off in the New York comedy scene for years, performing improv at the Upright Citizens Brigade theatre with his supergroup The Stepfathers and the theatre's famous ASSSSCAT 3000, doing stand up everywhere from Union Hall to the East Village, and of course, hosting The Chris Gethard Show every Wednesday night on Manhattan Neighborhood Network. His recent deal with IFC has propelled him further into comedy nerd stardom, and he's a friend of BrooklynVegan, having co-hosted our Lollapalooza interviews earlier this month, and we're happy to announce he'll be hosting our Bouncing Souls/Brian Fallon show at MHOW on 9/30 (part of Red Bull Sound Select).

Meanwhile, all of this is culminating in a spectacular Week at the Creek. Many comics are fortunate enough to get a residency at The Creek and The Cave. However, Chris Gethard is taking this coveted spot and running with it in a way that only he can.

On Sunday (9/1), he's inviting his "enemy" Vacation Jason (Riley Soloner) to perform his "hit mixtape" Coconut Berry Lemon Tree on stage with Gethard as he does stand up. Monday's show is still a secret, but promises to be "FUCKING COOL." Tuesday, Gethard is joined by Mike Birbiglia, who will give him an "in-depth public critique" on his stand up set, with the goal of making Gethard as anxious for his stand up recording as possible. On Wednesday, Gethard is recording his set for the first time ever, then afterwards heading to The Chris Gethard Show. For true fans who go to both the recording and that night's episode of the show, Gethard promises to buy dinner between the two shows. Thursday's show is also a secret, but is apparently going to "BLEND WORLDS." Friday is going to be yet another recording of his stand up set.

Chris Gethard is one of the hardest working comedians I know, and really, he's earned this Week at the Creek. All the shows are free, so there's no excuse not to check out at least one. He will definitely make it weird.