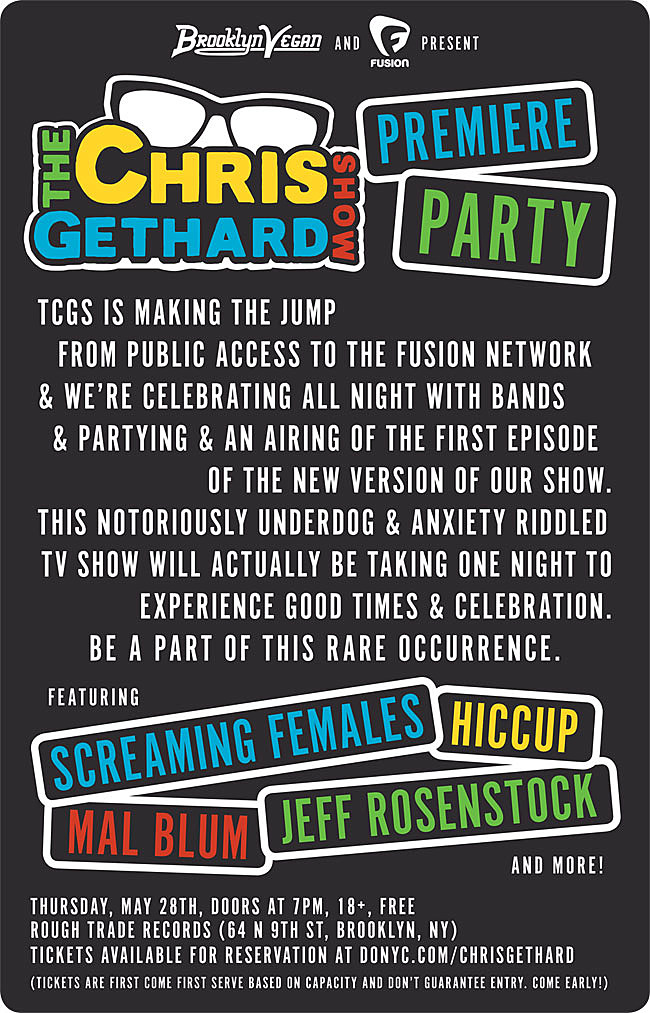 As previously mentioned, comedian Chris Gethard (whose credits include Broad City and Don Giovanni) is moving his public access show to cable network Fusion this month. The first episode airs on at 10 pm on 5/28. In celebration, BrooklynVegan is proud to announce that we've teamed with Chris and Fusion to throw a premiere party in Williamsburg on May 28 at Rough Trade NYC!

Chris will be there of course, and we'll have live music from his Don Giovanni labelmates Screaming Females and Mal Blum, as well as his old friend Jeff Rosenstock and new-ish band Hiccup who include Unlovables singer Hallie Bulliet, who's also a member of The Chris Gethard Show's house band. In addition to the music and live laffs, we'll also screen the first episode of the new show as it airs.

The party is totally FREE but you do need to RSVP, which is now open (18+ to get in). Even with RSVP though, admission is first come first served based on capacity, so get there early!

If you're unfamiliar with The Chris Gethard Show, here's some history in Chris' own words:

The Chris Gethard Show started out at the UCB Theater in 2009 and eventually spent four years on public access television, where it garnered a cult audience spread out all over the world. It's a highly interactive talk show that is known for empowering lonely kids, embracing its own loser status, and putting on some of the strangest comedy going. From having Zach Galifianakis give random audience members haircuts to hosting the first ever public appearance by a recently re-united Sleater Kinney, The Chris Gethard Show is producing some of the most innovative comedy of the last few years. They also created an annual holiday dedicated to sandwiches.

Chris also adds this about the premiere party:

After many years in the public access trenches, TCGS is headed to greener pastures. The Chris Gethard Show debuts on the Fusion network on May 28th, and Brooklyn Vegan is hosting a premiere party at Rough Trade Records in Williamsburg. The debut episode will be shown and a number of bands who are friends of TCGS will help celebrate the occasion. Hiccup features Hallie and Alex from the TCGS house band (The LLC). Mal Blum is one of the most beloved TCGS musical guests of all time. Screaming Females put on an unforgettable performance where King Mike insisted on having his head off screen the entire time. And Jeff Rosenstock was a part of an infamous evening known simply as "Eat More Butts". Please come out and join the celebration as these friends gather to celebrate New York's favorite resident underground show making the jump to cable.

Check out videos of Screaming Females, Jeff Rosenstock, and Mal Blum from public access episodes of TCGS, below...