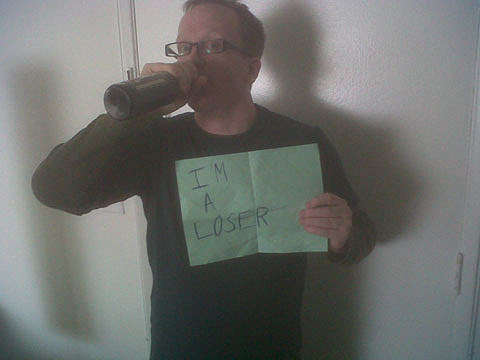 Back in January, I briefly mentioned the profoundly hilarious book A Bad Idea I Am About to Do by one of NYC's most brilliant performers Chris Gethard. I was so focused on all the other bullshit I was writing about in that article that my short, simple, brief mention of this masterpiece of a book was a profane oversight. Gethard is a phenomenal comedian and storyteller who also happens to have his own Manhattan cable access show every Wednesday night at 11:00pm. The show is absolutely crazy, insane, funny, irresistible, addictive and totally viewable LIVE online. Each week the show manages to feel somehow crazier and funnier. Sometimes Chris is in a great mood and the show is brilliant. Sometimes he's in a crummy mood and the show is brilliant. He's got a lot of help, care of his fabulous in-studio audience, but the dude carries that sucker to an unprecedented plateau of brilliance. But, the book... the book is one of the funniest, most well articulated canons of short (true) stories I've ever read. Even if you knew nothing about Chris, what he does, where he's coming from... if you read this book with absolutely no precedent or preconceptions about the author, you'd still laugh your eyebrows off. The stories are funny and even touching, but it's Gethard's agilities as an author that is most remarkable. I've said it before and I will say it again; I am nobody's shill. But when something is this good, this under-appreciated, this remarkably-not-in-the-hands-of-people-who-read-on-the-subway, I feel that it is my duty to make things right. Buy it. Unless you hate laughing. And good writing. Then f-off outta here.

In keeping with the concept of a bad idea someone (Chris) is about to do, Chris recently announced that he would be making his way from Los Angeles, California all the way to the 2012 Bonnaroo Music Festival in Manchester, Tennessee on foot. By June 7th. Without any money. Or places to stay. Or a phone. Or anything. This is a fan-propelled mission. It sets out to determine whether a person can get from point A to point B with just the help of his admirers and fans. Murder, starvation, molestation, exploitation, dehydration, masturbation(?) are all perils of a project this stupidly brilliant. The entire journey will be documented for your viewing pleasure. Want to help out? Check out the video below and allow Gethard do the 'splaining for me. There's tweetables and hashtags and cyberwhatnots for you to know about.

Oh, hey! Speaking of comedians I love who are also now published authors and are into Bonnaroo, I am sure you have by now done the right thing and pre-ordered Dave Hill's new tome Tasteful Nudes, right? Another absolutely hilarious and well executed book from another absolutely hilarious and well executed NYC based comedian. At the end of May, Dave will embark on a completely non-pretentious book tour that will make its way to The Bell House on Thursday May 24th (one night after Dave has a public conversation with Ira Glass in SoHo). This no holds barred event will have Mr. Dave Hill pulling out all the stops with appearances by John Hodgman, Janeane Garofalo, David Rakoff and music by Doug Gillard (Guided By Voices, Nada Surf) and TAB the Band. There may even be an appearance by Little Michael Jackson, a bunch of lowrider cars, live animals, and maybe even a dunking machine. All tour dates, which were too difficult for me to cut and paste into this article because my hands hurt, can be found here. Tickets for the Brooklyn show, which are a measly $10, are available now. Oh, and buy the book if you haven't already because maybe he'll sign it or throw it out a window at one of his apperances, depending on the vibes. Check Dave's awesome book related rock and roll video, as well as a video featuring him, Dick Cavett, and Malcolm Gladwell, below.