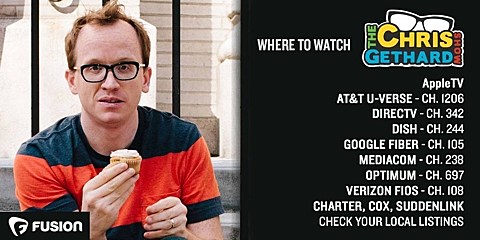 Tonight's (5/28) the premiere of the cable TV debut of The Chris Gethard Show (previously on public access), which the cable network Fusion recently picked up. If you'd like to watch it, check out the listings above for where to watch. Guests on the first episode are Ilana Glazer and
Abbi Jacobson of Broad City along with musical guest The Front Bottoms. Extra footage, including of the band, will also be posted on Fusion's website.

You can also watch the episode if you're going to the BrooklynVegan-presented premiere party at Rough Trade tonight. If you're going, you had to RSVP (which is now closed), but even with RSVP admission is first come, first served. Get there early! Doors are at 7.

UPDATE: The show aired and the premiere party happened and it was all awesome! Stay tune for more on that.

In addition to a screening of the show and comedy from Chris, tonight's show has music from Screaming Females, Jeff Rosenstock, Mal Blum and Hiccup.

Mal is also teaming up with Chris for one of his two Career Suicide shows at Union Hall, which will have "an hour of stand up focusing on suicide, alcoholism, and all the other funniest parts of life." She plays the second (June 15), and the first one (June 1) has another of Chris's musically inclined friends, Mikey Erg. Tickets for both are on sale now.

Mal Blum also has Palisades show (7/2) coming up, and Hiccup play one there with Chumped a day earlier.

Chris is also part of UCB's 2015 Del Close Marathon at the end of June.