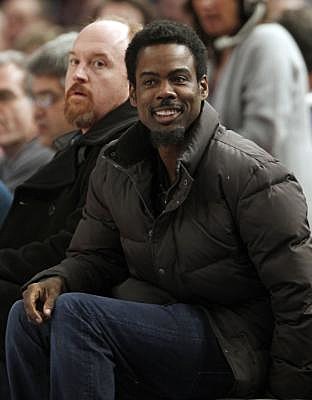 Chris Rock, who recently made surprise appearances at UCB, and with Louis CK (who he definitely thinks is great), and who has been known to show up at Hannibal Buress's weekly Sunday night show at Knitting Factory in Brooklyn, just talked to Judd Apatow for Vanity Fair. Judd asked him if he thinks comedians are better now? Chris said:

Do I think comedians are better now? Hell fuckin' no. Show me one guy or woman as funny as Rodney Dangerfield or as good as George Carlin, Richard Pryor, Bill Cosby, or Joan Rivers. There are a lot of good comics out there, no doubt, but as far as the quality of the comics goes, I think what you have is a bunch of situational comics. What we have now is black comics that work only black crowds, gay comics that do only gay crowds, and southern comics that only work down South, and so on with Asian, Latino, Indian, midgets, etc. The previous generation's comics were better because they had to make everybody laugh. Richard Pryor could do The Ed Sullivan Show and play the Apollo. Seinfeld can work any crowd. Ellen can work any crowd. Lopez can work any crowd. And a few more, but the rest of them are just situational comics.

Judd Apatow's new movie "This is 40" is out soon, music and acting by Graham Parker included.

Watch Chris, Louis, Seinfeld, and Ricky Gervais talk about what is funny, below...

--
Talking Funny - "Sitting On The Dock of The Bay"