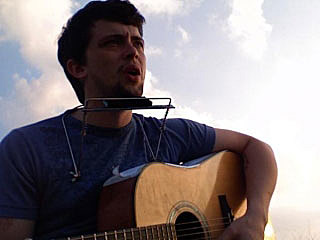 And his first is earlier that same day at the free BrooklynVegan day party at Pianos @ 2:30pm. He'll be playing upstairs from Joan as Policewoman who will be downstairs on the main stage. Stay tuned for the whole upstairs lineup. Pfork just gave his album Age Old Hunger a 7.4.

He credits his teenage discovery of Lefty Frizzell and Hank Thompson with inspiring him to write songs, and on Age Old Hunger he covers popular, some might say obvious songs by Kris Kristofferson and Johnny Cash. To his credit, however, he never comes across as a nostalgia act, which for this genre would be excruciating. Rather, he is content to sound like he sounds.

All of Christopher's tour dates are below....