Actors/Directors/Musicians and Comedy Icons Christopher Guest, Michael McKean and Harry Shearer are doing something they have never done before; performing a six week, 30 city multi-media acoustic tour without wigs and electric instruments.

UNWIGGED & UNPLUGGED: An Evening with Christopher Guest, Michael McKean and Harry Shearer has the legendary musical and comedic trio performing music from heavy metal's loudest band Spinal Tap along with the folk music from A Mighty Wind, and more.

Tickets for the UNWIGGED & UNPLUGGED tour go on sale Friday, March 6th (mostly at Ticketmaster), with the tour starting Friday, April 17th in Vancouver and ending Sunday, May 31st in Milwaukee.

UNWIGGED & UNPLUGGED is not about funny costumes and characters, but rather three long time friends and collaborators who make each laugh and love nothing better than to find some excuse to get together and play music. The trio commented, "With this being the 25th Anniversary of the film This is Spinal Tap, we thought this would be a fun and at the same time, a little challenging, as we have never performed as ourselves. Think of the evening as three old friends jamming in your living room. As opposed to OUR living rooms; we won't be home."

The NYC shows (plural) are May 26th and May 27th at the Beacon Theatre. More info, all dates and exact on-sale dates, below.... 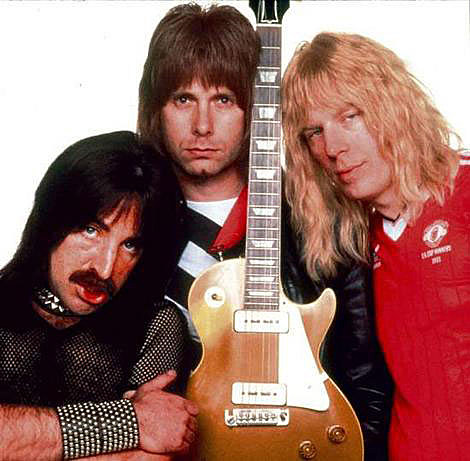 UNWIGGED & UNPLUGGED will feature songs from the original soundtrack This Is Spinal Tap (1984), the studio album Break Like The Wind (1992), and A Mighty Wind (2003) along with some special surprises and rarities thrown in.

Guest, McKean, and Shearer have a rich history going back decades. Guest and McKean first met in college where they wrote songs together. As for McKean and Shearer, they have known each other since 1970 when they were both members of satirical group The Credibility Gap on radio, stage and records.

In 1984, Reiner and the lads devised a way to bring the group back this time in a major motion picture, This Is Spinal Tap, and the rest is history, literally. This Is Spinal Tap was ranked #29 of the "100 Funniest Films of All Time" by The American Film Institute and The Library of Congress added the film to the National Film Registry's list of 25 American cinematic works selected for historical preservation calling the film a 'culturally significant' work. Entertainment Weekly recently awarded TISP eleventh place (of course) in their "cult film" list. And Netflix has ranked This Is Spinal Tap in the Top 1% of all Netflix Titles in terms of total rentals to-date!

And the music of Spinal Tap is as popular today as it ever was - their song Tonight I'm Gonna Rock You Tonight has been featured everywhere from the best selling video game Guitar Hero 2 to a Hallmark musical greeting card.

As for the ultimate compliment, the phrase "Up to eleven: up to maximum volume" was included in the Shorter Oxford English Dictionary as an ode to Nigel's amp that had controls that went beyond the usual maximum setting of 10..."Louder."
In 2003, Guest, McKean and Shearer came back reincarnated for the Christopher Guest directed film A Mighty Wind where they portrayed The Folksmen, a trio of folk musicians consisting of Mark Shubb (bass vocals and upright bass, played by Harry Shearer), Alan Barrows (tenor vocals, mandolin, guitar, and five-string banjo, played by Christopher Guest), and Jerry Palter (baritone vocals, guitar, and mandolin, played by Michael McKean). The title track A Mighty Wind (written by Christopher Guest, Eugene Levy and Michael McKean) was a 2004 Grammy Award Winner for Best Song Written for a Motion Picture while the song A Kiss at the End of the Rainbow (written by Michael McKean and Annette O'Toole) was nominated for an Oscar for Best Song. And over the years, Guest, McKean and Shearer have continued to appear and work together in various configurations in the Guest directed films: Waiting For Guffman (1996), Best In Show (2000) and For Your Consideration (2006).

Guest, McKean and Shearer summed up their working relationship and friendship this way, "The three of us make each other laugh and that's why we continue to do this. Why work with somebody who is going to bore you to death? If you have a choice about things like that, no one's going to choose the guy that puts you to sleep. "