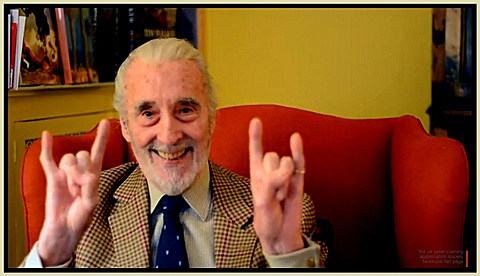 Horror icon, occasional metal musician, and all-around cool dude Christopher Lee died on Sunday (6/7) in a London hospital. He was 93. From Billboard:

According to media reports, Lee died on Sunday morning, June 7 at Westminster Hospital in London after being admitted for respiratory problems and heart failure. The Guardian reported that his wife, former Danish model and painter Gitte Kroencke, decided to release the news days later in order to inform family members first. The couple had been married since 1961.

Lee was a staple of Hammer Films' horror films, played the (thrice) titular James Bond villain in The Man with the Golden Gun, freaked audiences out in The Wicker Man, and had roles in both The Lord of the Rings and The Hobbit trilogies, and the Star Wars prequels (as Count Dooku, he was probably the least lame thing in those). But it wasn't until late in life that his love of opera, history AND heavy metal came to the fore, working with Rhapsody of Fire and Manowar before releasing his first symphonic metal LP, Charlemagne: By the Sword and the Cross, in 2010. You may also remember his 2012 metal Christmas single. Rest in peace, Christopher Lee. You led a long, awesome life.

Stream Charlemagne: By the Sword and the Cross via Rdio and watch the video for Lee's "The Bloody Verdict of Verden," below.