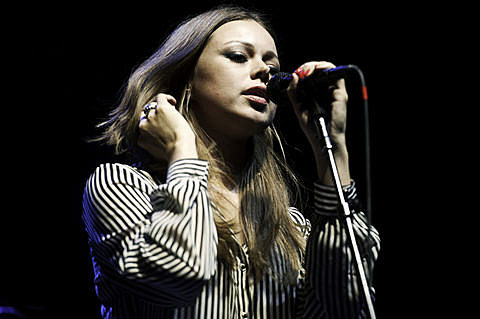 Chromatics who released the much talked about Kill For Love earlier this year, and was in NYC for two shows last month, are continuing to play shows internationally over the next few months. They'll return to NYC for another show on July 22 at Dekalb Market in Brooklyn for a "Fixed x Dog and Pony" show with Blondes. Some of their other US dates, including Boston and Philly, are with Hot Chip, who play Prospect Park with Gang Gang Dance a few days prior (7/18).

Blondes also play Dekalb Market, but on June 3rd (and not with Chromatics as originally posted). Both shows, and one with Maxxi Soundsystem, are on sale.

Chromatics have also released a drumless version of Kill For Love. Here's what Johnny Jewel told Pitchfork about the album:

It's 11 tracks, because some of the tracks don't have drums to begin with. It's all the pop songs without drums... I think people will have a lot of fun with it because everyone keeps remixing 'Birds of Paradise' because there were no drums on it... I also mastered an instrumental version of the entire album. I always master multiple versions in case I want to collage or edit them later. I was really liking the way the vocal mixes sounded with no drums and I think that the drums on the album are so heavy, that it's interesting to hear the record as this almost-empty, almost-a cappella kind of thing.

Download the drumless Kill For Love for free and check out the tracklist and listen to one of those "Birds of Paradise" remixes, with all dates below...

Drumless Kill For Love Tracklist:
1 The Page
2 These Streets Will Never Look the Same
3 Lady
4 Kill for Love
5 At Your Door
6 Back From the Grave
7 A Matter of Time
8 Candy
9 The River
10 There's a Light Out on the Horizon
11 Into the Black

^ with Glass Candy
* with Hot Chip
+ with Blondes