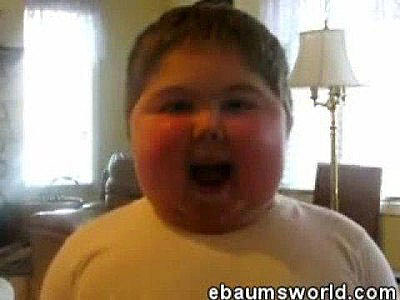 If you're one of the 75 million people who viewed "Chubby cuppy cake boy" (or 3 million who watched "Cuppy Cake Sam") singing or possibly lipsyncing "Your My Honeybunch (The Cuppycake Song)" on YouTube since 2008, you might be interested to know what he's up to now...

HIS NAME IS SAM ALLRED...

A Wasilla boy with a chronic illness is on a mission to spread kindness across the country and he isn't shy about sharing his story. Sam Allred has actually written a book about what it's like to be a child with a rare kidney disease.
At 13 years old Sam is not quite four feet tall. The medicine he takes to fight his disease has stunted his growth and plumped his features. Sam looks different, a fact that was hammered home to him at an early age.
When Sam was eight years old his sister posted a video of him on YouTube singing "The Cuppycake Song."
The video went viral and people posted comments from around the world. Most found Sam's chubby cheeks adorable but some people made nasty comments about his looks, not knowing he was sick.
Sam says some of those comments brought him down.
"So people just think, 'oh he's fat,'" says Sam. "And that his parents don't care about him, but it's not our fault."
But instead of lingering on feelings of hurt, Sam turned his situation around. Not long after the video he announced to his mother that perhaps he may have gotten his illness so he could help other people.

More about Sam, and pillows he sends to children in need, at KTVA.