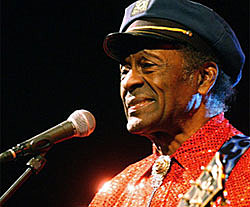 If you've still got no particular place to go on New Years Eve and are looking for a potentially spectacular musical option, you could always ring in a new decade of Rock and Roll with one of the legends that started it all. Chuck Berry is coming to town to play two NYE shows at B.B. King Blues Club and Grill, the same venue where he performed to bring in 2009 one year ago. The early show is actually a rescheduled date from November that is being offered to previous ticket holders, and both shows came after The Dan Band cancelled their scheduled appearances at the Times Square venue on that night ("rescheduled for Spring"). Tickets to both Chuck Berry performances are on sale.

The 83 year-old guitarist and pioneer still tours the world with some inspiring regularity; he has a monthly residency at Blueberry Hill's Duck Room in St Louis (he currently lives just outside the city in Ladue, Missouri), and even played several gigs in Brazil this summer. Berry last toured Europe extensively in 2008 (he also played The Virgin Mobile Festival in Baltimore that year) and had plans on a return to the UK this fall. However he ended up canceling those dates due to "a lack of lead-in time to prepare the marketing and advertising for what promises to be a great rock 'n roll tour," according to promoters. That tour was set to begin on November 21st, but has now been rolled over for March of 2010.

We have two tickets to give away to the early NYE show. Ticket giveaway info, tour dates, and a few Chuck Berry videos below:

John Lennon and Chuck Berry do Johnny B. Goode

TO WIN TICKETS TO THE EARLY SHOW @ BB KING's: email BVCONTESTS@HOTMAIL.COM (subject: Chuck Berry) with your first and last name (you must be 21+). One winner will be picked at random and contacted by 12/24/09.