UPDATE (good news): Chuck's death may be a hoax!

UPDATE 2: Chuck Biscuits is not an easy man to get a hold of these days, but someone is now claiming that Otis Link did in fact do that. 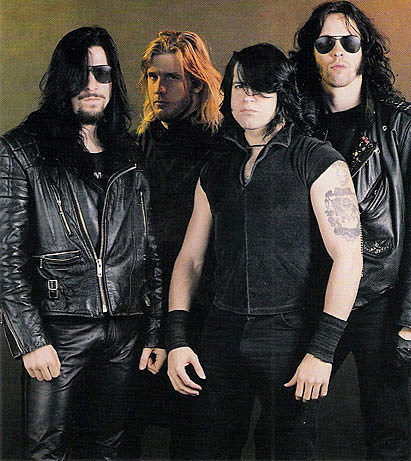 Legendary hard rock drummer Chuck Biscuits, whose lengthy résumé included stints in such flagship underground acts as Black Flag and Social Distortion, died Saturday after a prolonged battle with throat cancer. He was 44.

"In response to the inquires, thank you for all the support," an anonymous family member wrote in an e-mail sent this morning. "Chuck did not survive his battle with throat cancer. He passed surrounded by his family on 10/24/09."

Chuck Biscuits was probably best known to the general populous for his work with Danzig. Beginning in 1988, Chuck played on that group's first four albums, which are often hailed as Danzig's best (thanks in no small part to Chuck's powerful drumming style). The percussionist also appeared on 1993's Thrall: Demonsweatlive EP; that release yielded an unexpected chart-burning hit for Danzig in "Mother," a song the band originally included on their self-titled debut. [JG2 Land]

Chuck Biscuits, known not only for his drumming, but for being the member of Danzig without black hair! Chuck also played with the Circle Jerks, D.O.A., Fear, and even drummed on a RUN DMC album. He died way too young. R.I.P. DIDN'T DIE