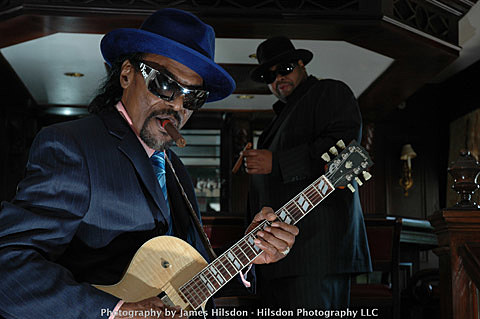 Anyone who has spent any significant amount of time in Washington, DC is familiar with the rhythmic conga/bongo cadence of the regional music phenomenon called Go-Go. One of the godfathers of the Go-Go movement is Chuck Brown.

Brown's musical career began in the 1960s playing guitar with Jerry Butler and The Earls of Rhythm, joining Los Latinos in 1965. He still performs music today and is commonly known in the Washington, DC area. Brown's early hits include "I Need Some Money" and "Bustin' Loose"... [the latter of which was] interpolated by Nelly for his 2002 number one hit "Hot in Herre." Brown also recorded go-go covers of early jazz and blues songs, such as "Go-Go Swing" Duke Ellington's "It Don't Mean a Thing If Ain't Got That Swing", "Moody's Mood for Love", Johnny Mercer's "Midnight Sun", Louis Jordan's "Run Joe", and T-Bone Walker's "Stormy Monday"..

He has influenced other go-go bands such as Big G and The Backyard Band, Rare Essence, Experience Unlimited (EU) [yes, the E.U. responsible for doin' "Da Butt"], Little Benny and the Masters, and Trouble Funk. ..Brown is considered a local legend in Washington, D.C., and has appeared in television advertisements for the Washington Post and other area companies. -[Wiki]

For some of you beatheads/sample nerds, you may also recognize Chuck Brown's work from the highly sampled "Ashley's Roachclip" from the Soul Searchers' Salt of the Earth LP, which was sampled by everyone from Duran Duran to Eric B & Rakim (audio below, head to 3:30).

Chuck Brown has a few upcoming shows scheduled and makes a stop in NYC to play two gigs on July 30th, a free Celebrate Brooklyn show in Prospect Park with Dr. John and the Lower 911 & Red Baraat, and a later show at SOB's. SOB's tickets are on sale.