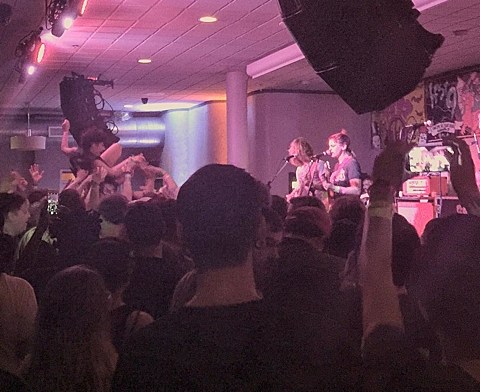 Brooklyn pop punks Chumped were one of the more promising local bands of late. They put out one full length and two EPs over the past two years, but unfortunately they announced that the set they played at The Fest this past weekend would be their last before an indefinite hiatus. The day before the show, they wrote:

It brings us a metric fuck ton of feels to say this, but tomorrow will be our last show for an indefinite period of time.

It would be really special if you all would come out to help us celebrate.

Chumped played for the first time in front of other humans on February 5th, 2013. We never could have imagined the things that a little project started in an apartment in New York City could have allowed us to experience. We have traveled incredible distances, made beautiful friends and actualized seemingly impossible dreams. Thank you to everyone who has been a part of this project, who has listened, who has helped, who has believed in us, who has loved us. We love you. And we never could have done any of this without you.

You can watch a 45-minute full-set video of their Fest set below. Their last hometown show was the BV-presented Baby's show in August with Cayetana, Worriers and Thin Lips.

On the bright side, Chumped members are already staying active with other projects. Singer Anika Pyle and drummer Dan Frelly started the duo Katie Ellen (whose first show was at Suburbia right before Fest) and Anika is playing solo shows too. Anika's next scheduled gig is December 5 at Suburbia for a night of "mostly soloish sets" from her, Mikey Erg of The Ergs and six million other bands, one of which is Worriers whose singer Lauren Denitzio also plays the show. $5 at the door.

UPDATE: Katie Ellen have two Brooklyn shows coming up too. The first is November 14 at Tiger Lounge with Deacon Bill, Never and Ted's Dead; and then they play the release show for Adult Dude's debut LP Adult Moods on November 19 at Union Hall with Dead Stars (tickets).