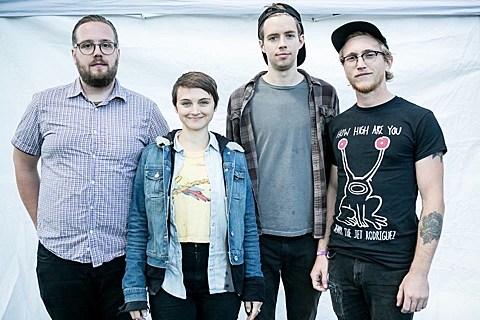 Brooklyn pop punks Chumped wrapped up a great 2014, which included the release of their acclaimed debut album, at Acheron on 12/30 with Plow United, and they're wasting no time returning to the stage. They already announced a tour supporting Andrew Jackson Jihad with The Smith Street Band and Jeff Rosenstock, which hits NYC on 3/20 at Warsaw (tickets, but you can catch them in their hometown sooner than that.

Chumped will team up with the very promising Roger Harvey in Brooklyn on February 8 at Grand Victory. Also on that bill is Never. Tickets are on sale now. Updated Chumped dates are listed below.

Meanwhile, you can catch Roger Harvey in Brooklyn sooner than that when the plays the BrooklynVegan-presented Sidekicks release show with Cayetana and All Dogs on January 23 at Baby's All Right. Tickets for that show are still available.

Speaking of local melodic punk bands, Iron Chic, who Chumped have played with at least once, have two hometown area shows coming up. The first is this Friday (1/9) at Court Tavern in New Brunswick, NJ with The Best of the Worst, City Limits, Podacter and Scout ($12 at door). The second is in Brooklyn on February 20 at Union Hall, also with City Limits, as well as After the Fall and Up For Nothing. Tickets for that one are on sale now.

All Chumped dates are listed, with videos from them, Roger Harvey and Iron Chic, below...

Chumped - "December Is The Longest Month"