Cibo Matto at Littlefield in 2013 (more by Amanda Hatfield) 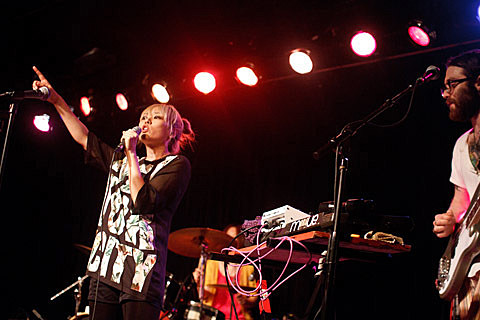 Cibo Matto are back in action with a new album and tour this month. As mentioned, the tour includes a NYC show happening on February 14 at Le Poisson Rouge with Salt Cathedral. Since we last spoke, that show sold out, but the band have tacked another NYC show on to the end of the tour happening March 8 at Brooklyn Bowl with Buffalo Daughter. Tickets for that show are on sale now. Updated dates are listed below.

UPDATE: Cibo Matto also do a free in-store and signing at Other Music on 2/14 at 6 PM before the LPR show.

Cibo Matto's new LP, Hotel Valentine (their first since 1999), comes out next week (Valentine's Day), but you can now stream the whole thing at NPR.

Video for its single "MFN," along with the list of dates, below...