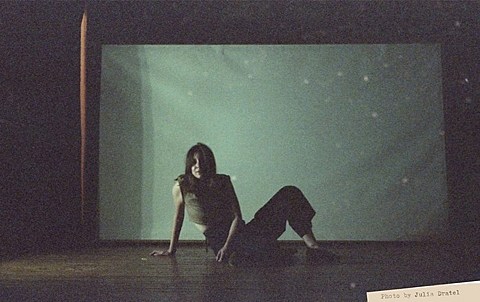 Chicago's Circuit des Yeux (aka Haley Fohr) returned earlier this year with the intriguing, challenging art pop of In Plain Speech, her first full-band album and first for Thrill Jockey. She toured with that band earlier this year, and she has more dates coming up now. She'll be in New York for Hudson, NY's Basilica Soundscape, and will play NYC right after that.

The NYC show happens on September 13 at Saint Vitus with Robert Aiki Aubrey Lowe (aka Lichens) and Spires That In the Sunset Rise (who you may have seen last year with Slint). Tickets for that show are on sale now. All dates are listed, with the video for "Do the Dishes" off the new album, below.

Haley is also one half of Mind Over Mirrors (with Jaime Fennelly), whose new album The Voice Calling will be out September 18 via Immune Recordings. Check out the single, "Calling Your Name," below.