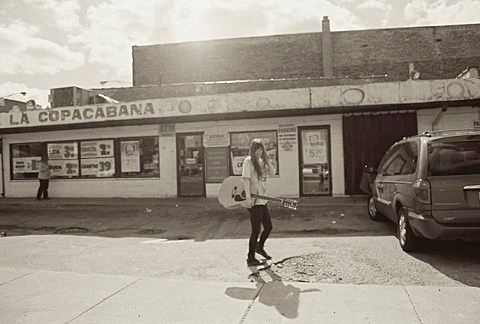 Two experimental artists, Chicago's Circuit Des Yeux (aka Haley Fohr) and Maine's Jason Lescalleet, are teaming up for a short tour of the Northeast together this November. That tour brings the two musicians to NYC for a show on November 6 at Silent Barn with two quality local openers, PC Worship and Driphouse (aka Daren Ho of Raccoo-oo-oon). All dates are listed below.

Circuit Des Yeux released her three previous albums on De Stijl, but signed to Ba Da Bing for her fourth and newest one, Overdue, which came out earlier this month. We recently wrote about that album on BV Chicago:

With the assistance of CAVE's Cooper Crain, Fohr built the temporary U.S.A. Studios in Little Village this winter for two-months of tracking. Despite the less-than-ideal locale with elevated trains roaring just a few dozen feet away, the pair set up shop to the best of their abilities and have laid down Fohr's most accessible material yet. That is not to say she's lost her experimental touch though, this set of tunes is just a bit more polished. The LP's lead single is "Lithonia," a song that originally appeared on January's CDY3 10", and they've reworked it for the forthcoming effort. The number received a soaring string arrangement in lieu of the original's lightly-strummed guitar. Fohr wails over the cinematic backdrop, "Doesn't it feel grand to have a second chance," almost like she might be celebrating having one.

I'll add that in addition to those arrangements, a huge appeal here is her excellent voice, which can be clear and operatic, Kate Bush style, or covered in noisy, Swans-like dissonance.

Jason Lescalleet on the other hand, who we've written about on BV a few times, is less "musical" in a traditional sense, instead pulling from noise/drone and field recordings. Jason and Circuit Des Yeux make for an excellent, contrasting double bill, and it'd be a good one to catch for fans of this kind of stuff.

All dates and streams/videos from both artists below...