Citizens Arrest in Garden City (more at The Trashman's Reader) 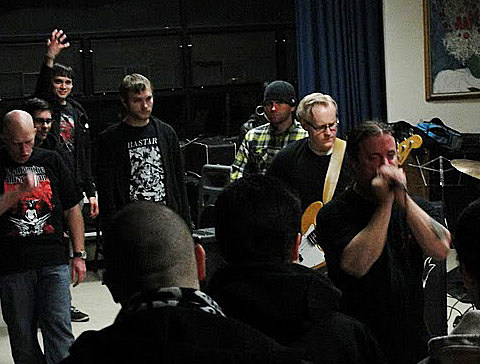 Though Ted Leo is currently on the road with Ted Leo & The Pharmacists (they played The Champ in Leoyne, PA that night), the rest of Citizens Arrest (cXa) played their first reunion show on Saturday (12/4) as a special guest at Distort NY 2010 in Garden City, NY. cXa's appearance was unannounced at the Long Island show, which also featured performances from Capital, No Tolerance, The Men, Nomos, and Concrete Cross.

Ted Leo didn't play with Citizens Arrest Saturday, and he didn't play with Yo La Tengo this Hanukkah either. However, he will join his current project, Ted Leo & The Pharmacists, at Terminal 5 with The New Pornographers tonight (12/6). Tickets are still available.

The Citizens Arrest setlist from the Long Island show is below, along with video of the band playing "Pressure's On".

Citizens Arrest, 12/4/10 Setlist (via)
Pain/Fortress
Death Threat
Utopia
I Won't Allow
Briviba
A Light In The Darkness
Woodstock
Activate
Agony God
Number
Through The Mist
Pressure's On
CDRF
Without Peace
In The Distance
Serve & Protect