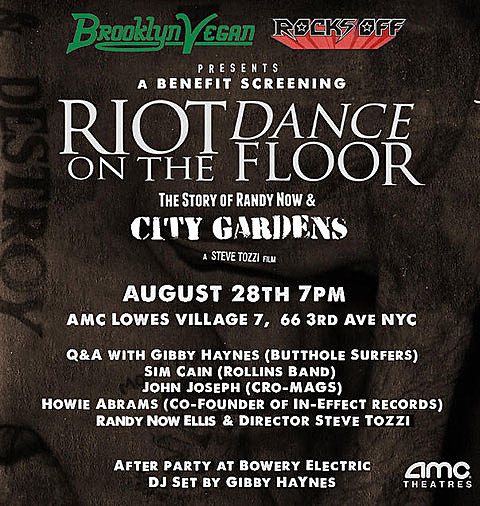 The BrooklynVegan-presented NYC premiere of "Riot on the Dance Floor, the Story of Randy Now & City Gardens" is happening this Thursday, August 28 at AMC Loews Village 7 in the East Village. Tickets are still available, and they include an after-movie Q&A with Director Steve Tozzi, and City Gardens booker-and-subject-of-the-documentary Randy Now, and Gibby Haynes (Butthole Surfers), Sim Cain (Rollins Band), John Joseph (Cro-Mags) and Howie Abrams (co-founder of In-Effect Records).

Gibby Haynes is also DJing the free afterparty at Bowery Electric. See you there?

Want to go to the movie for free? We're giving away a pair of tickets to one lucky winner. Details on how to enter to win, and a video of Butthole Surfers playing the club in 1985, below...