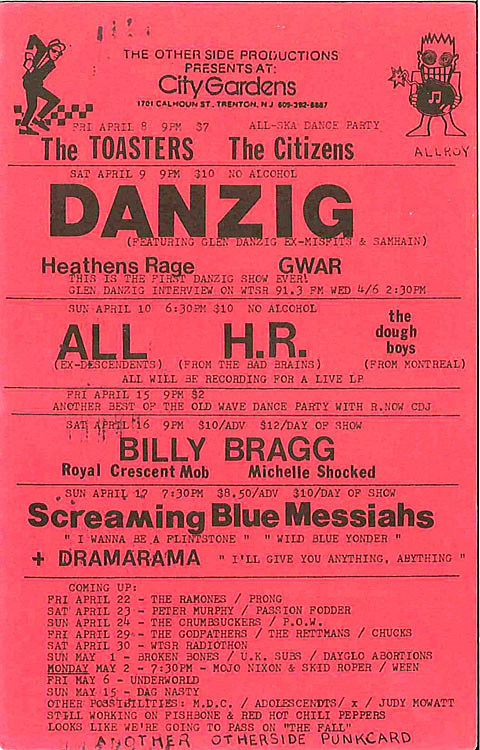 City Gardens was larger than a club (it held almost 1,100 people) and smaller than most theaters. During its time it hosted a multitude of live events that traversed the entertainment spectrum; everything from the comedy of Henny Youngman and Sam Kinison to the raging chaos of bands like The Butthole Surfers and The Exploited. Punk, Hardcore, New Wave, Heavy Metal, Hip-Hop, Ska, Reggae, Oi!, Industrial, Alternative, Funk, Goth... all these influences converged perfectly under the uncanny direction of Randy Now to form a perfect storm of seminal, historic moments. Over the course of a decade-and-a-half, City Gardens played an active part in the rise of bands like Nirvana, Jane's Addiction, Sinead O'Connor, Green Day, The Red Hot Chili Peppers, Faith No More, The Beastie Boys, Nine Inch Nails, Joan Jett and dozens of others who went on to international success while, at the same time, providing a home for the music that never made it to commercial radio. The list of performers who graced the City Gardens stage is long and varied, and includes legends like The Ramones, Iggy Pop, Agnostic Front, The Circle Jerks, Cro-Mags, UK Subs, The Pogues, The Mentors, Joe Strummer, Fugazi, The Toasters, Dead Kennedys, Sham 69, Peter Murphy, Soundgarden, Slayer, Black Flag, The Bad Brains and literally hundreds more. These monumental shows are recalled by the people whose lives were indelibly touched and forever altered by the experience. The voice is given to the people: the bouncers, the stage managers, the sound techs, the bartenders (including former booze-slinger and current host of The Daily Show, Jon Stewart); the roadies and, most importantly, the fans.

The documentary Riot on The Dance Floor examines City Gardens and booker Randy Now, who hosted some of the most legendary bands of the era at the Trenton, NJ club. Funded via Kickstarter, look for the film to surface in 2013. Until then, check out some clips and a trailer for the film below.