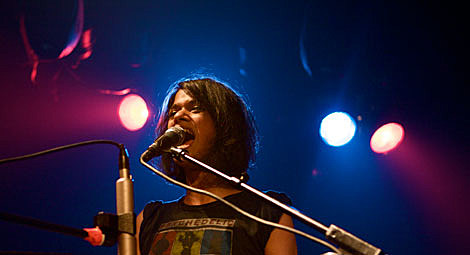 We already knew that Fiasco is one of the band's playing Citysol 09 on July 11th at Stuyvesant Cove Park in NYC (23rd St in Manhattan - all the way east). The confirmed lineup for that free show also includes Shilpa Ray and Her Happy Hookers, Love Like Deloreans, Hi Red Center and Schwervon!.

The annual environmental festival runs from July 10th-12th at Stuy Cove Park with the concert day being the Saturday. Like last year, Digiwaxx will be curating the fest's hip-hop/funk lineup. We helped out with the whole lineup in 2007.

Fiasco will also be at Citysol's pre-fest youth benefit concert at Solar One (same location) on Saturday, June 13th.

The benefit concert on June 13th was conceived and curated by [Citysol's] 18-year-old high school intern, Corinne Monaco. The other confirmed bands on the bill are Starscream, Run Time Error, The Mighty Handful, Consumer Feedback, The Sediment Club, The Whisky Crusaders and Lorrain and Her Demons.

Fiasco is playing another show that same night at the Market Hotel with Mika Miko, the Strange Boys and Coathangers.

It'll be Shilpa Ray's second year in a row at Citysol -- she also played the 2008 fest. This year she'll also be playing the Sly Stone tribute at Castle Clinton just a fest days after on July 16th, and a just-announced show at Southpaw on July 1st.. Her May Wednesdays residency at Pianos continues on the 20th and 27th of this month.

The Stuyvesant Cove Park is not to be confused with the Stuyvesant Town Oval, which is hosting its own free shows throughout the summer. The schedule for that series includes Kaki King, Jay Reatard, the Budos Band (who played Citysol in 2007) and more.

Videos from last year's fest, with upcoming Fiasco tour dates (including one at a new space - with a familiar name - Shea Stadium) below...

No Surrender live at CitySol Festival 2008