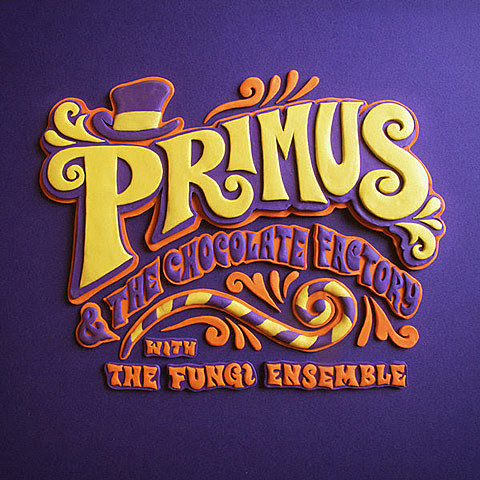 The classic lineup of Primus that made Sailing the Seas of Cheese (Les Claypool, Larry "Ler" LaLonde, and Tim "Herb" Alexander) have gotten back together for a new, food-themed album, due out October 21. Specifically it's a tribute to the classic 1971 movie musical version of Roald Dahl's Willie Wonka & the Chocolate Factory, covering the entire soundtrack in their own inimitable way. (Even "Cheer Up Charlie" which used to get cut from the TV version.) Says Claypool:

The idea was to combine the Frog Brigade and Primus, and do this record,' says Claypool. I think like a good portion of the planet, we were all pretty put off by the remake of the 'Willy Wonka' movie - the Tim Burton version. I really wanted to pay homage to a film that was very important to me as a kid and very influential to me musically. So that's what we did. And as opposed to just going in and recording the songs and playing them the way they are in the film, we twisted them up a bit...twisted them up a lot.

You can stream "Pure Imagination" from Primus & the Chocolate Factory below.

The day after its release, Primus will head out on tour, playing NYC on Halloween (10/31) at Beacon Theatre for a show billed as "An Evening With Primus and the Chocolate Factory." Tickets for the NYC show go on sale Friday (8/1) at 11 AM, with Livenation and Chase Cardmember presales beginning Thursday (7/31) at 11 AM.

Tim Alexander, who is touring with the band, is currently recovering from triple-bypass surgery, so rest up till then, dude.