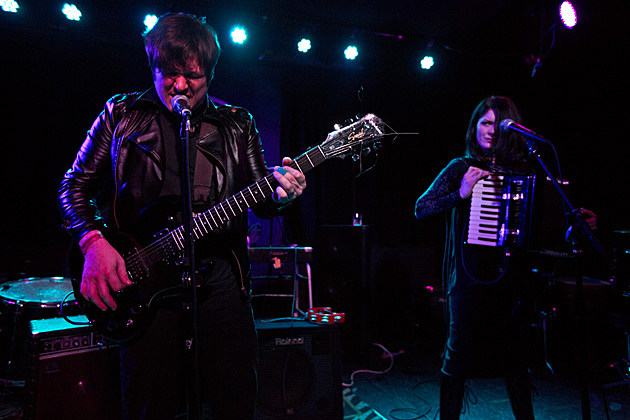 Post-industrial husband and wife duo Clay Rendering are teaming up with dark ambient master Lussuria and minimalist noise/ambient project Dual Action for an east coast tour in early May that, unfortunately, doesn't hit NYC. All three acts have released material on noise purveyors Hospital Productions, and for the Hospital collectors out there the tour will present an opportunity to steer clear of Discogs for a while--there will be a merch table consisting of new and sold out releases at each show. All dates are listed below.

Mike Connelly, one half of Clay Rendering, was once a member of experimental noise originals Wolf Eyes. Wolf Eyes will be appearing at Red Bull Music Academy's stacked Hardcore Activity in Progress show, which also features Tim Hecker, Napalm Death, Gunplay and many more. Just ten bucks gets you in to that show at Knockdown Center in Queens on Friday May 16. Tickets are still on sale, and we're also giving away a pair. For a chance to win, retweet this Invisible Oranges tweet.

In more Hospital Productions news, power electronics project FFH will be performing at this Wednesday's (5/7) edition of the weekly Nothing Changes party at Home Sweet Home. Check out the full upcoming Nothing Changes schedule.

All dates for the Clay Rendering and Lussuria tour are listed below...