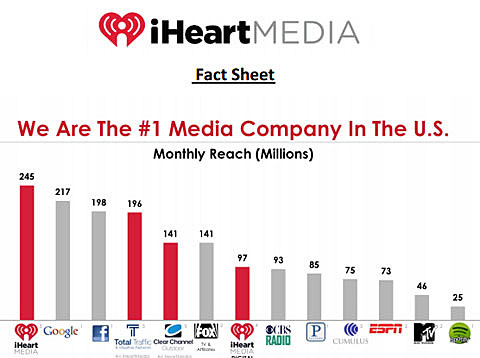 It's been almost nine years since Clear Channel spun off Live Nation (who went on to buy Ticketmaster). Now:

Clear Channel on Tuesday refashioned itself as iHeartMedia, accentuating how the lines between online and AM/FM radio are blurring at the country's biggest company on the broadcast dial.

"It's not a company with a bunch of old radio stations and outdoor [billboards] anymore," Chief Executive Bob Pittman said in an interview. "We've transformed, so let's now take a name that matters."

Streaming is the industry's most promising segment of growth, but tech-centered outfits like Pandora -- the Web's biggest radio operator -- and on-demand subscription services like Apple's Beats Music and Spotify tend to attract the most attention as they race to dominate the burgeoning sector. By recasting itself as iHeartMedia, Clear Channel not only recognizes the company itself has changed but also believes it will get due credit in the tech community for its gargantuan scope, Pittman said. [CNET]