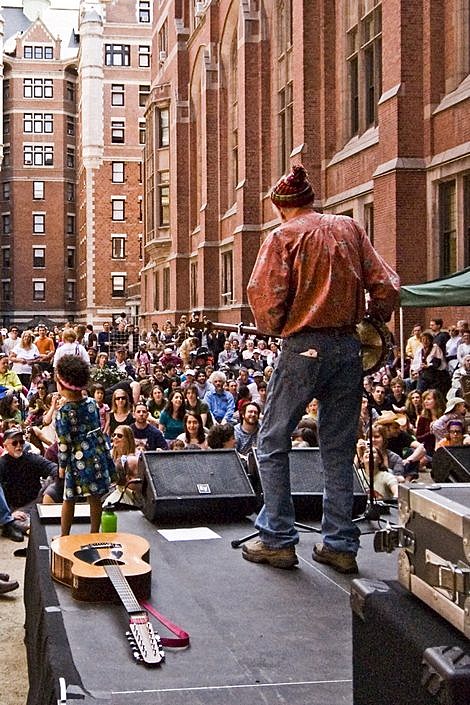 "Clearwater conducts innovative environmental programs, advocacy and celebrations in order to inspire and energize the next generation of environmental leaders.

Clearwater was founded in 1969 by music legend and environmental activist Pete Seeger." [Clearwater]

Pete Seeger's been busy lately, especially for someone who just celebrated his 90th birthday. The event for that occasion took place at Madison Square Garden on May 3rd, and is reviewed in full below, with pictures. A few weeks before that, on Earth Day (April 18th), Pete played a show at Columbia's Teachers College. Photos from that show are below too. Right after that he headed to New Orleans to perform at Jazz Fest. Prior to those, Seeger played the Clearwater benefit with Jeff Tweedy at Beacon High School on March 28th. We also recently noticed his name as the special guest on a show at Joe's Pub.

This summer Pete Seeger is scheduled to play the Newport Folk Festival (August 1st and 2nd), and will perform at his own Clearwater Festival, taking place in Croton-on-the-Hudson, NY this weekend (June 20th and 21st). The Clearwater Fest lineup includes Dr. Dog, A.C. Newman, Elvis Perkins in Dearland, Richie Havens, Old Crow Medicine Show, Alejandro Escovedo, Arlo Guthrie and others. Its full schedule is below. Tickets are still sale at the gate.

UPDATE: we can confirm that Pete played his scheduled Saturday morning Clearwater Fest performance "with kids" for those who braved the rain. Pete will perform again at the festival on Sunday afternoon with his grandson Tao Rodriguez-Seeger.

A review of Pete Seeger's 90th Birthday Celebration at MSG, and all above-mentioned photos, with the full Clearwater Festival lineup & schedule, below... 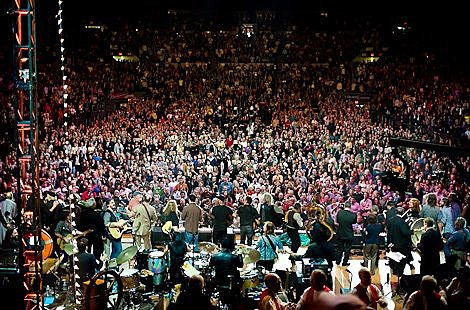 On Sunday May 2nd, a barge bedecked with nautical rope, captain's wheel and ratty fishing bouys set sail on a sea of middle aged white liberals.

It was Pete Seeger's 90th birthday, and while all the hip kids were at Dark Was the Night, old folkies, folk descendants and inheritors, misplaced rock stars, BRUUUUCE and one Muppet got together to celebrate and raise money for Seeger's environmental project Hudson River Sloop Clearwater. The scene was something between Pirates of the Caribbean and the 'Free Credit Report.com' commercial in the seafood restaurant. A dozen video cameras swept back and forth on rails and cranes: this was either a PBS special in the works or the sequel to A Mighty Wind. (Update: this WAS being filmed for a PBS special, to air in late summer.)

Pete Seeger certainly deserves respect and a good party at 90. He comes from a time when his to-the-point protest songs were the meat of a cultural movement (which landed him in the middle of the McCarthy hearings) and his inclusive, communal approach to music drew in countless youngsters to pick up guitars and start singing over the decades. His commitment to social change and environmental causes is ceaseless, turing his birthday into a fundraiser was certainly classy. But in my opinion, his 900 albums for Folkways in the 50's and 60's did more to catalog the music than further it. Many times in the concert dragged along despite the pantheon of musical Gods assembled.

It was quite a marathon, almost 5 hours with an intermission. Several members of the SNL house band were there to provide steady and often minimal backing, the Preservation Hall Jazz Band came on and off several times as the horn section, the NYC Labor Chorus hung out in the back looking like a gang of candy stripers. Each lineup played a single song.

Many of the performances were straightforward, dutiful recitations of the bedrock, iconic folk songs that Seeger either wrote or popularized: "We Shall Overcome" (with much hand holding in the audience), "If I Had A Hammer" (Mellencamp) "Where Have All the Flowers Gone" (Joan Baez solo), "Jacob's Ladder," "Oh Mary Don't You Weep" (Arlo), "Amazing Grace" (Pete-led sing-along), "This Land is Your Land" (finale with everyone on stage) and "This Little Light of Mine," "Goodnight Irene" (closing numbers).

These were some of the more interesting musical moments:

Taj Mahal and Tom Morello performing "Waist Deep in the Big Muddy" -- an odd pairing, Morello (who's been performing folk music under the Nightwatchman name) couldn't quite live up to the traditional mastery of Taj, Morello's voice sounding forced and his blues licks rudimentary, if not accidentally atonal.

Oscar the Grouch and Tom Chapin duet on (what else) "Garbage" -- Oscar + MSG made me think I was at Sesame Street Live.

Ben Harper on stage with his mother Ellen Chase-Verdries and aunt Sue Chase performing "Gather 'Round the Stone" -- perhaps not the most interesting performance but an interesting lineup to see Harper in the context of his family.

Roger McGuinn (of the Byrds) performing "Turn, Turn, Turn" with DBT/Band of Horses fellows. McGuinn's voice sounded as clean and lovely as on the original LP.

Bruce Springsteen and Tom Morello performing "Ghost of Tom Joad" -- Bruce as strong and powerful as ever, he gave a great speech about Seeger before performing. The least eloquent but most quotable: "He looks like your granddad if your granddad could kick your ass."

Everyone for the finale -- "This Land Is Your Land," "Happy Birthday," "This Little Light of Mine" and "Goodnight Irene" -- the army of musicians danced off the stage.

Over at Dark was the Night -- a group sing-along of "This Land Is Your Land" was happening about the same time, before Sharon Jones came out and ripped the audience a new one. 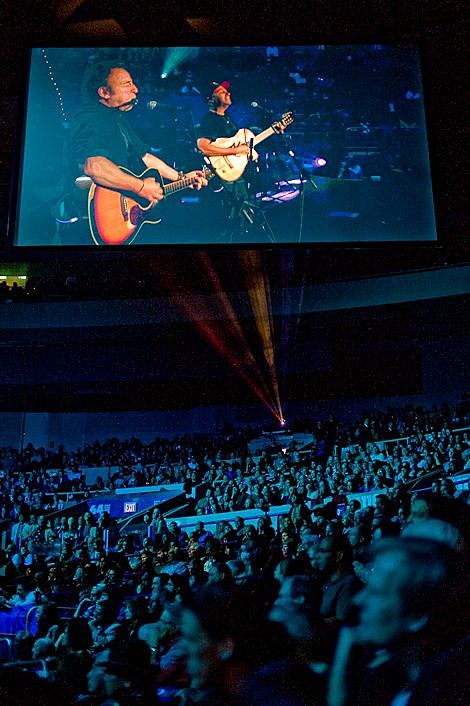 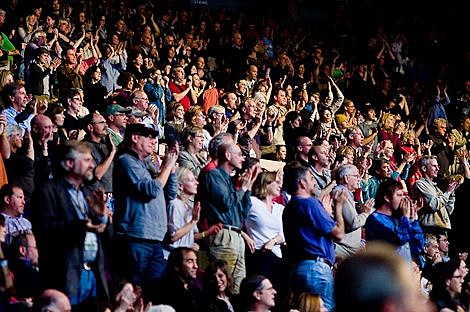 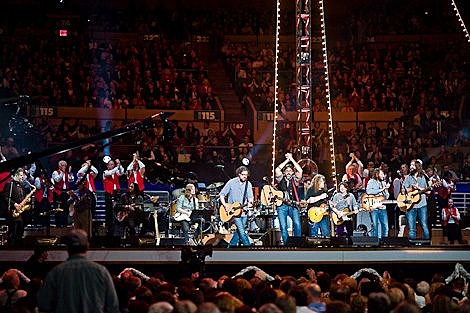 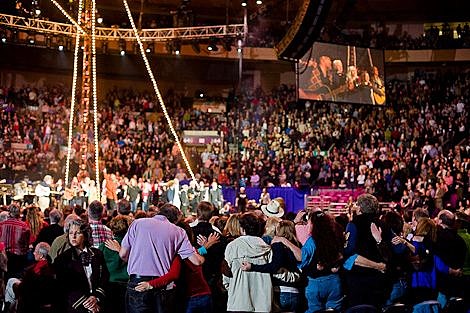 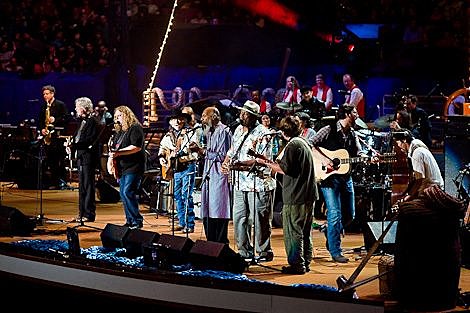 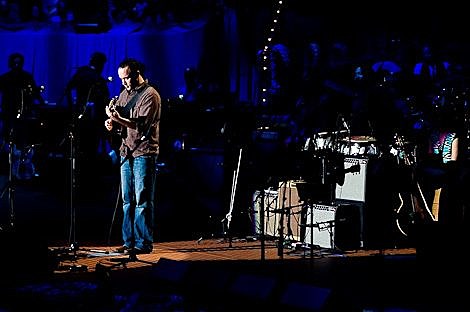 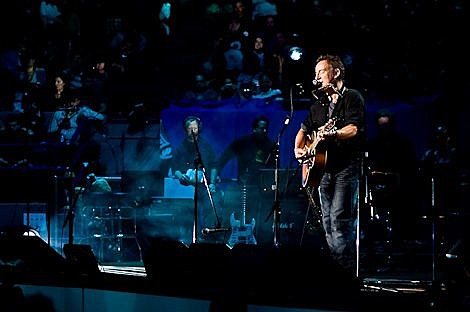 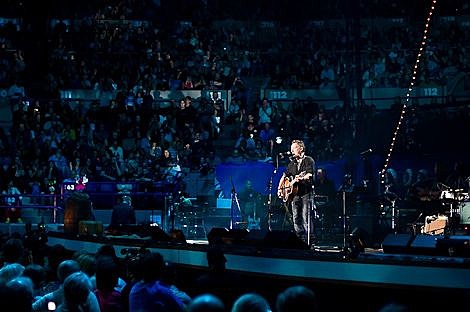 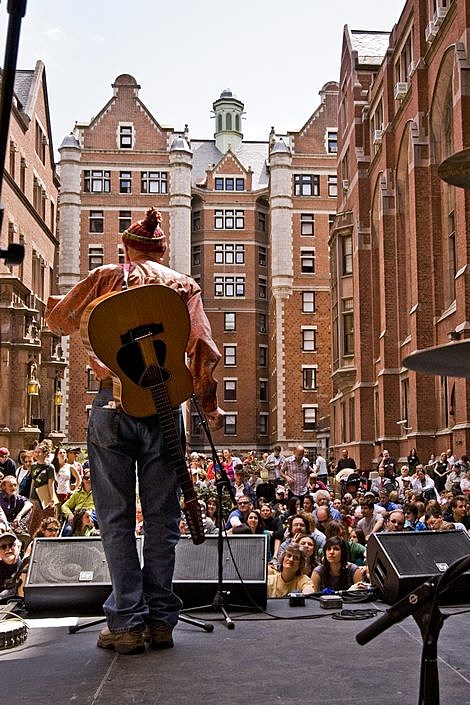 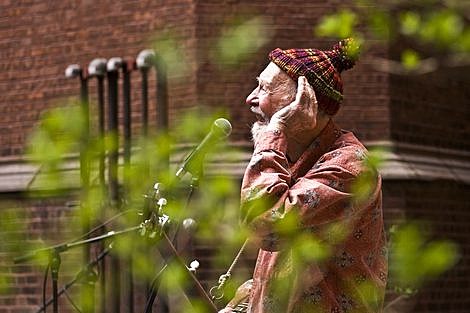 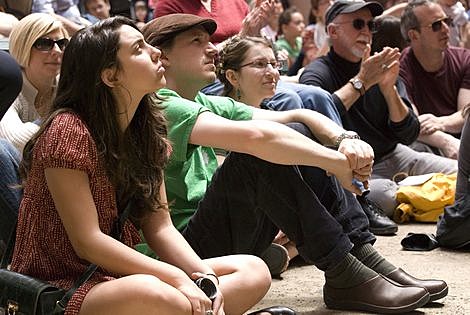 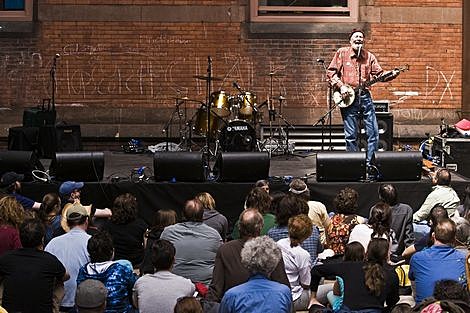 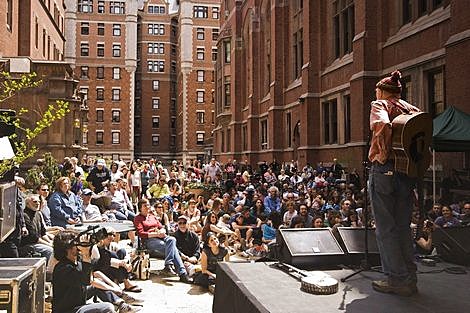 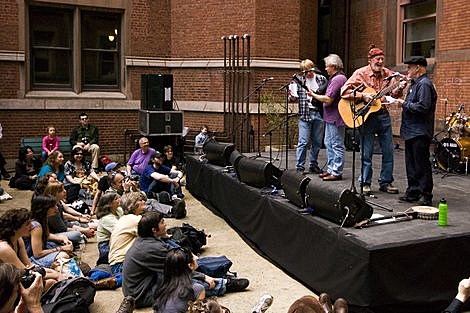 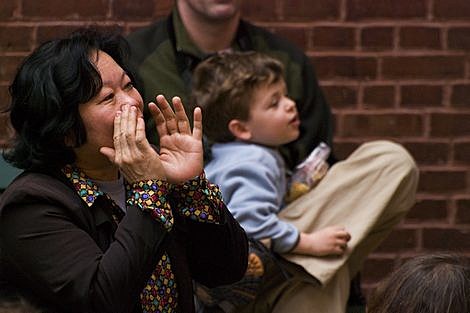 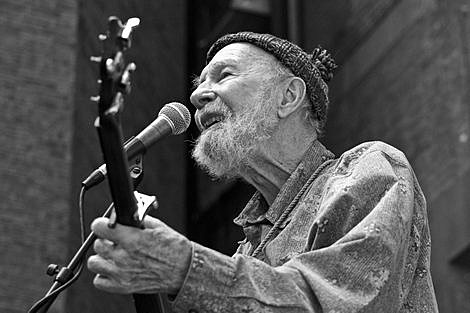 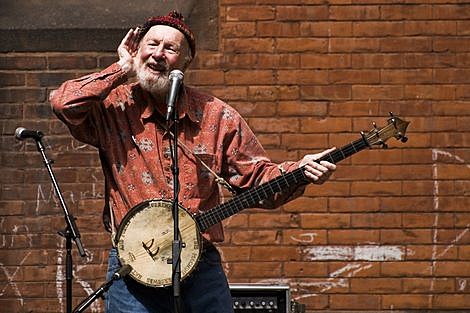 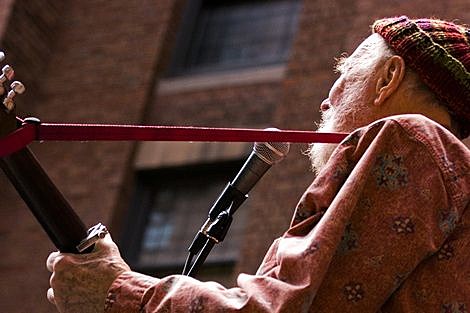 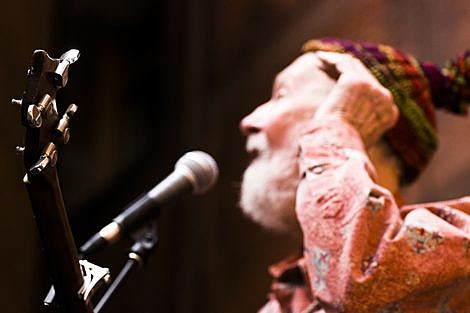 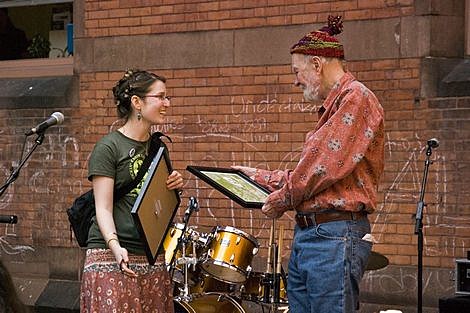 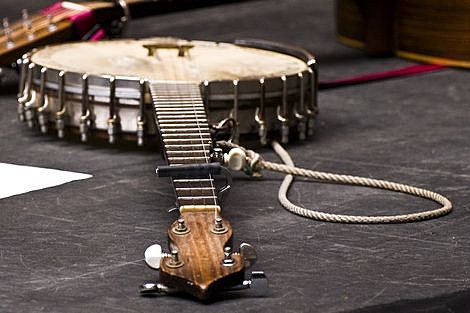 Circle of Song (COS)

CIRCLE OF SONG (COS)