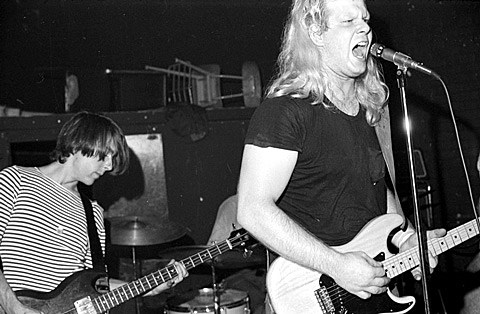 Actually, a more logical question would be: Who are X_____X?

Anybody who has his or her ears tuned into punk-rock 45s would probably describe X___X as the swingingest foursome to have hit the music scene since the British invaded these shores. But X_____X didn't come from England; they thundered out of Ohio's Lake Plains, specifically Cleveland, a wild and uncivilized area of the continent from whence the quartet derived its earthy, hip-swiveling rhythms so evident in the group's potent recording of Your Full of Shit. - Jon Savage

Cleveland art punks X_____X (pronounced "X Blank X") were only together for six months or so in 1978 but left a lasting impression on those who saw them. A compilation, Sticky Fingers X, was released this year -- stream a couple tracks below -- and the band got back together back in August for their first live show in 35 years. They're now on a short tour which is in NYC tonight (12/4) at Cake Shop with an interesting lineup featuring Weasel Walter's project Cellular Chaos, plus a collaboration between Yeah Yeah Yeahs drummer Brian Chase, Ron Anderson and Richard Hoffman. X_____X will also play WFMU's Monty Hall on Sunday (12/7) in Jersey City with Blues Control and Silk Purse (tickets).

All dates are listed, along with a few tracks to stream, below...