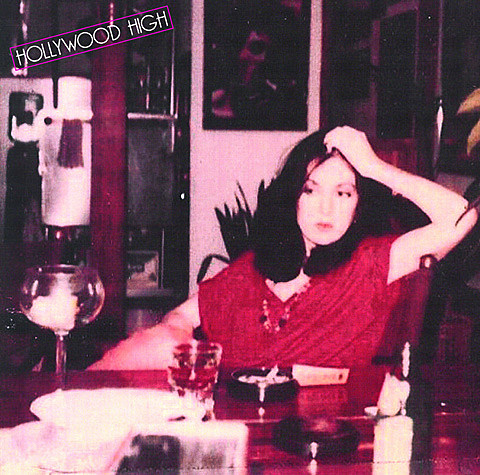 While Pere Ubu and other Ohio cousins were offering only cerebral dissonance, the 1977 punk explosion visited Cleveland in the form of the Pagans. Picking up where the departed (for NYC) Dead Boys left off, the Pagans were younger, louder and, if not as snotty, better in other ways. Led by raspy-voiced Mike Hudson, this slam-dunk garage quartet produced a small stack of classic singles: "Not Now No Way," "Street Where Nobody Lives" and "What's This Shit Called Love" (later covered by the Meatmen) are all down and dirty, glorious three-chord excursions into the filth and the fury.- [Trouser Press]

The original lineup of Cleveland punks The Pagans broke up before ever making an album, though main man Mike Hudson put together versions of The Pagans for tours and a few recordings since. Hudson has lit the torch under The Pagans again in earnest and they'll release Hollywood High -- the first Pagans album in nearly 25 years -- next week (11/4) via Ruin Discos. That's the cover art above and Hudson explains it's significance to the album:

The front cover is a photo of Evita Corby taken by the legendary Irish crooner and bass player Phil Lynott in the dining room of legendary LA club owner Elmer Valentine's house, which burned down shortly afterward. The songs on this record are about Mrs. Corby, who I fell madly in love with when the famous LA / Detroit band The Dogs did a cover version of 'Her Name Was Jane,' a song I wrote almost 40 years ago. They flew me out here, she was the chick in the video, our first date was a week in Vegas. Evita is probably best known as the cover girl on Iggy and the Stooges Kill City LP and as the wife of Michael Corby, who fronted the well known 80's band The Babys...She was my everything.

You can stream "Fame Whore" off the album, which makes its premiere in this post, below.

"Fame Whore" is also the title of Mike Hudson's new novel, which is also loosely based on his relationship with Evita Corby. Some context: after his punk career, Hudson became a crime reporter in Niagra Falls and later used his skils to pen his highly-regarded memoir, Diary of a Punk: Life and Death in the Pagans which is well worth picking up.

The only upcoming Pagans date is an in-store at Los Angeles' Blue Bag Records on December 6 where they'll play semi-acoustic and Hudson will also read from Fame Whore.