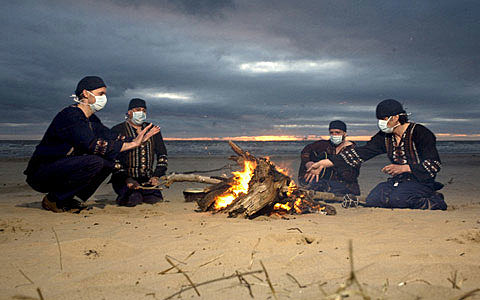 They're still wearing the surgical masks, but little else appears -- or sounds -- recognizable with Clinic, whose new album Bubblegum is out October 5. While the band haven't released any full tracks from it, they have offered up a "characteristically unique megamix" via Soundcloud where snippets of Bubblegum play underneath some spoken piece. Gone, for the most part, are the sinister organ drones and punky rave-ups. In their place, we get the sort of gental, pastoral sounds you're more likely to hear from Stereolab or High Llamas.

Not that there wasn't a connection between what those groups and Clinic did, but there seems to be more of one now. Still it's hard to really tell with that dude going on about how "his hastily scribbled-down phone number was received with a wry smile." The album's first single, "I'm Aware," is out September 21 and will feature a video directed by Pete Fowler (who you may know from his artwork for Super Furry Animals).

If you can't wait till then, Clinic have lined up three live dates in August. They play The Bell House on August 16, then Joe's Pub on August 19 and Maxwell's on August 21.

Check out the "megamix" medley after the jump.