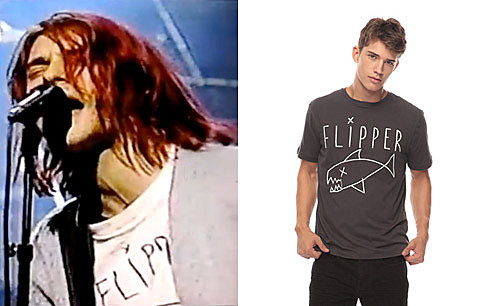 Forever 21 is under fire... this time for selling a shirt designed by Nirvana frontman Kurt Cobain, who committed suicide at his Seattle home in 1994.

No, Cobain wasn't much of a fashion designer. But he knew how to use a magic marker, which is how he made the noted Flipper band T-shirt he wore during a 1992 performance on "Saturday Night Live."

Earlier today, a replica of the shirt was retailing on Forever 21′s website for for $16.90. The shirt has since been pulled from the site, meaning Forever 21 might not be too keen on fighting legal battles over items that cost less than $20.-[SeattlePI]

A video from that episode of SNL below...