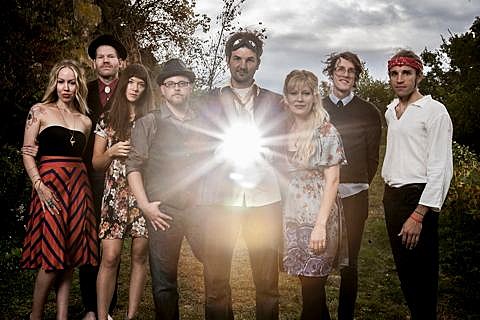 Minnesota's Cloud Cult released Love last year which was their ninth album, and another good example of their brand of heartfelt, orchestrated pop. The band, whose shows often incorporate visual art into their performances, have a few dates lined up for 2014, including a NYC show at Music Hall of Williamsburg on April 17. It's billed as "An evening with Cloud Cult" with two sets -- one acoustic and one electric. Tickets for that show go on sale Friday, January 17 at noon with an AmEx presale beginning Wednesday (1/5) at noon. All tour dates are below.

If you're unfamiliar with the band, you can catch up with their music -- and the band's sometimes tragic, often ispiring history -- via the full-length documentary, No One Said it Would Be Easy, which was recently made available on Hulu for free streaming.

Cloud Cult are not to be confused (but maybe are) with Australia's Cloud Control who play NYC this weekend.

Trailer for the Cloud Cult documentary and tour schedule are below...

Cloud Cult: No One Said It Would Be Easy - trailer