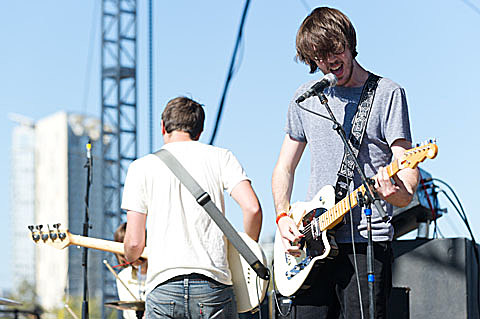 As mentioned, Cloud Nothings are releasing their sophomore album, Attack On Memory, on January 24 via Carpark and playing a NYC show at The Studio at Webster Hall two days later (1/26) before heading out on a full tour in support of the album. Bleeding Rainbow and Jump Into the Gospel open the Studio show and most of the rest of the tour includes dates with A Classic Education and Mr. Dream. Tickets for the Studio at Webster Hall show are still available.

Less than a minute into desolate album opener "No Future/No Past" (download above) it's clear that Cloud Nothings are miles beyond the Wavves-y pop punk of their self titled debut. And while I was not a huge fan of that debut, Attack On Memory is immediately winning me over. There's a real '90s Seattle/Sub Pop vibe with frontman Dylan Baldi embracing the lengthy moans of Sunny Day Real Estate's Jeremy Enigk and the pack-a-day grit of Kurt Cobain on In Utero (which, like this album, had Steve Albini behind the boards). Albini's overexposed production lets you lean in so closely to Dylan's screams that you can feel the pain his throat must have been going through while recording. But while his production is an essential part of this record's sound, Albini doesn't deserve all the credit. Cloud Nothings are truly a different band than they were a year ago. The second track, "Wasted Days," is bridged by a long instrumental passage until Dylan brings in the most blood-spitting screams on the album. The album does still have its poppier moments ("Fall In," "Cut You," "Stay Useless," the latter of which you can download above) but they're delivered with far more confidence and grit than anything the band have put out before. "Separation" is an entirely instrumental track, transitioning ferocious guitar-driven passages in a Sonic Youth type fashion, and even diving into some scrapey SY-type riffs. That track is followed with the album's last moment of pure dirtiness with "No Sentiment," which has enough Dave Grohl-like drum fills to pass as an In Utero b-side.

You can preorder the album from Insound and get a free exclusive poster (pictured below) while supplies last.

"No Future/No Past" and "Stay Useless" can be downloaded above and streamed below, along with all dates and poster...