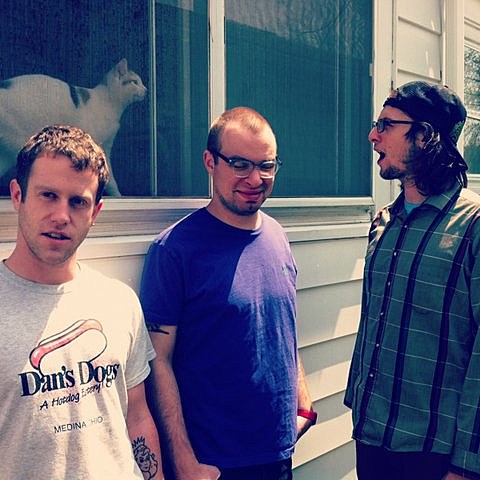 Cloud Nothings members Jayson Gerycz (drums) and Joe Boyer (guitar) already have the side project Total Babes, who released the album Swimming Through Sunlight last year, and now they have yet another side project called Chomp, and they've taken their Total Babes bandmate Chris Brown along for the ride. Unlike Total Babes, Chomp is primarily fronted by Joe Boyer, and if you've picked up on his backup vocals in Cloud Nothings, Chomp actually sounds pretty familiar.

They're set to release their debut LP, Buddah Jabba Momma, on September 18 via Exit Stencil and they'll celebrate the album with a release party a few days later in Brooklyn on September 21 at Cameo Gallery with Swearin'. Tickets for that show are on sale now. The show falls in the middle of a short tour the band will be on this month, much of which is supporting Cloud Nothings. All dates are listed below.

You can download two album tracks, "Throw Out Your Wish List" and "Done Waiting," at the top of this post, or stream them below. Also below is the album's cover art, tracklist, and a list of all dates.

Buddah Jabba Momma Tracklist:
1. Standing To Fail
2. Done Waiting
3. Hammers and Nails
4. Witch Hunt
5. Baited
6. Throw Out Your Wish List
7. Fresh Wounds
8. Mind Rape
9. Mission - Demolition
10. In Dreams I Pull Out My Teeth
11. To Save Everything