Cloud Nothings at Terminal 5 in October (more by Tracy Allison) 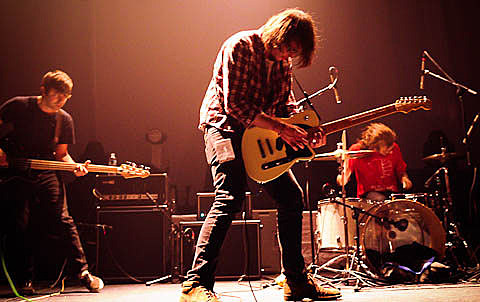 One band we've been seeing on a ton of year-end lists this year is Cloud Nothings for their great album, Attack on Memory, which literally attacked everyone's memory of what the band was prior to this record (and is my personal favorite of the year). Today, we learn the exciting news from a Dylan Baldi interview with MTV Hive (via Consequence of Sound) that Cloud Nothings have not only "written most of" a followup album due out in 2013, but it's going to be "noisier and less straightforward." \m/

"The album is a little less melodic. It's noisier and less straightforward. I think people will be able to handle it." Baldi's looking back further on this LP, taking inspiration from early punk. "There's one track that sounds a lot like early Wire, that I really like. There's not really words yet, I write them super last minute when I'm in the studio."

They'll start recording in April and hope to have it out in the fall."I want to do one thing each year or else I'll feel like I'm lazy," Baldi says.

Maybe it will turn out like that great middle section on "Wasted Days"? You can listen to that song below.