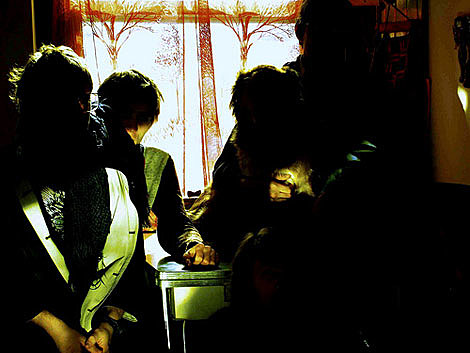 Over four years after the break up of The Unicorns, founding member of that band Alden Penner will release the debut of his new project, Clues. That record, also called Clues, will come out on Constellation Records on May 19th. Check out two tracks from the album above (with a previously posted demo) and let us know if you think it sounds at all like Unicorns/Islands.

The band, who played SF's Noise Pop '09 earlier this year, will tour North America in support of the new record. That tour includes a Wednesday, June 17th show at Santos Party House. Tickets for the NYC show are on sale. Hopefully they all make it here this time.

Full details on the new album, including track list and artwork, plus all tour dates, below... 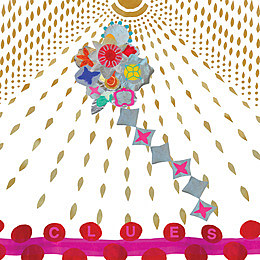 This is the wondrous debut record from Clues. Co-founders Alden Penner and Brendan Reed have been quietly nurturing this project in Montreal since the demise of their respective bands, Unicorns and Les Angles Morts. As a member of the short-lived Unicorns, Penner's songwriting prowess was unveiled in a bright burst of mysterious and kaleidoscopic energy, in the form of a single full-length album (released in 2003) and countless live shows.

This debut record yields one undeniable tune after another. It is one of those albums that coheres effortlessly in spite of the restless energy and distinct identity of each song - nothing ever really sounds or stays the same, but neither are there any forced spastics or facile schizophrenics. Forged from postpunk, no-wave and psych influences, Clues compose a rare breed of complex pop anthems that consistently inscribe their own perfect limits, without overreaching and without pandering. The overriding aesthetic avoids ornate decadence and stringent economy in equal measure. An authentic, unfussy and stirringly epic little sonic world unfolds: idiosyncratic and enigmatic, but exuberantly infectious and approachable.

Clues offer up a highly original, intensely committed and hugely satisfying definition of indie rock and we are genuinely thrilled to be shepherding it into world. [Constellation Records]