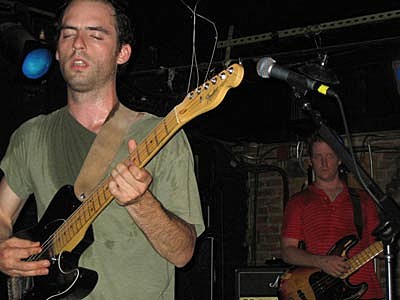 "There were long lines in two directions down the street for this buzzed bill. Even though both local bands play in the city quite a bit, out of towners packed the house to hear what all the commotion was about (for CYHSY mainly)." [CMJ]

THE ORIGIN OF THE NAME | A WALL IN BROOKLYN

"I knew it sounded familiar! I dragged Jed out to photograph the graffiti I'd seen in Brooklyn on Baltic street between 3rd and 4th avenue." [Stereogum on the origin of the name] 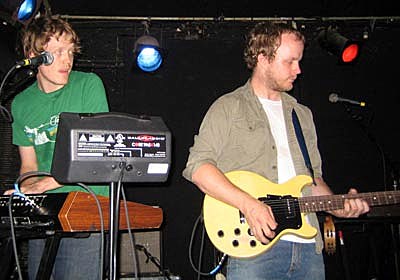 "...Brooklyn's Clap Your Hands Say Yeah has signed a distribution deal with Warner Music Group's ADA Distribution. Reuters had an article on this the other day. ADA president Andy Allen called it exactly what it is: very unusual..." [Coolfer]

Thanks JJ for the pics of CYHSY's CMJ show at Mercury Lounge Friday night (Sept 16, 2005). I didn't go, but I did take pictures of the line outside. Jed Stereogum and Productshop were inside with JJ.