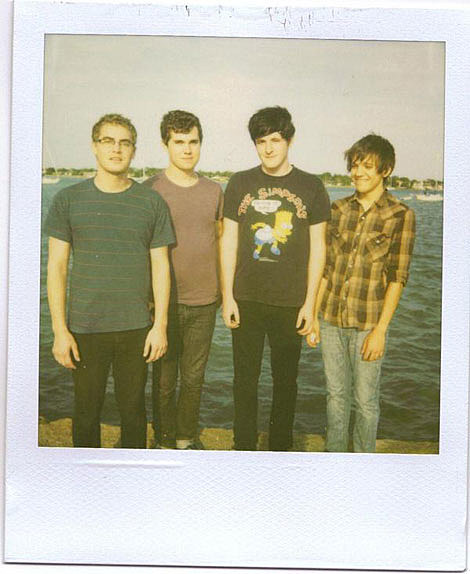 As I mentioned in that big post about Montreal bands at CMJ, The High Dials are among them and are just great live -- sort of country-tinged jangly shoegaze -- and they're impressive live. They play Lit Lounge at 10:15 and then Arlene's Grocery at 12:30AM. If you like Ride, The Byrds, or Brian Jonestown Massacre, you shouldn't miss these guys. Also playing at Lit Lounge, earlier in the evening (8:30) are Montreal's Black Diamond Bay which features a couple former members of the Dears and feature a similarly bombast rock sound. They're very good live too, especially if you have an appreciation for the live musician O Face.

If you like electro /dance there is an insane lineup at Santos tonight. And it's free. No badges required. The killer lineup includes three UK dancepop acts: Dan Black whose album Un is pretty fun; the borderline-novelty (but fun) Man Like Me and trio We Have Band who played here back in March. It keeps going: there's also Australia's Midnight Juggernauts, Montreal's We Are Wolves, Denmark's Spleen United (somewhere between Placebo and Presents), Toronto's Parallels, and LA's Paparazzi. There's also a slew of NYC acts: Maluca, The Terror Pigeon Dance Revolt, Lemonade,Heartsrevolution, Javelin, and The Golden Filter. Did I mention it was free?

At Union Pool, the folks at Panache Booking are showcasing a big handful of their bands, many of which have unnecessary repeated consonants: recent Brooklyn Vegan Day party veterans JEFF the Brotherhood and Lovvers, plus Flexions, zZz, Turbofruits, UUVVWWZ, and Dark Meat. Having seen at least half of these bands, I'm going to go ahead and say this'll be quite a party, whether you like it or not.

If you're going to the Pitchfork/Showpaper show at Market Hotel and wished that it was rock all night instead of switching over to electronic acts/DJs after midnight, your admission will also get you into the show happening down the street at Todd P's Above the Auto Parts Store venue (600 Bushwick), which has four great bands: Sisters, Screaming Females, Surfer Blood (again) and JEFF the Brotherhood (again). To get in for free you need to get there before 11PM; afterwards it's $10.

Or, you might think about heading to Silent Barn before or after (or instead of). Popjew has a great line-up of bands, including much-loved-by-me Let's Wrestle, A Classic Education (who were great at our Thursday day party), twangy West Coasters Slang Chickens, My Teenage Stride and the electro-rock of Jacques Detergent.

And at The Bell House, there's Au Revoir Simone and the related (literally, by marriage) Pursesnatchers; the lush, 60s-ish chamber pop of Florida's The Postmarks, indiepop ska band Still Flyin' and Brooklyn-via-Australia band The Miracles of Modern Science. The Bell House may seem like truly dedicating your night to one venue, but luckily it's one of the nicest, most comfortable in the city.

Other shows tonight include Mum, Sufjan's BQE screenings, the Sub Pop showcase, the Kemado/Mexican Summer showcase, and the Topman party with the Almighty Defenders and Neon Indian. 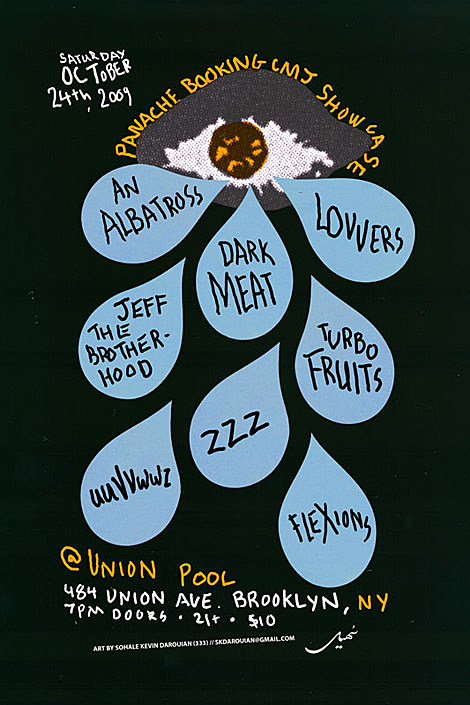 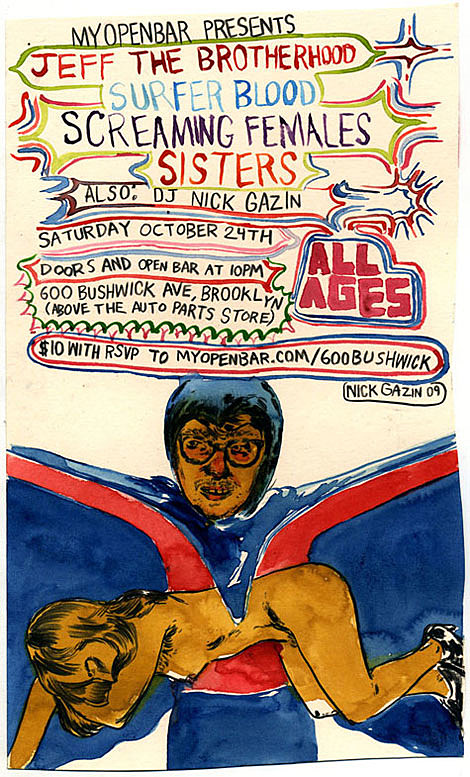 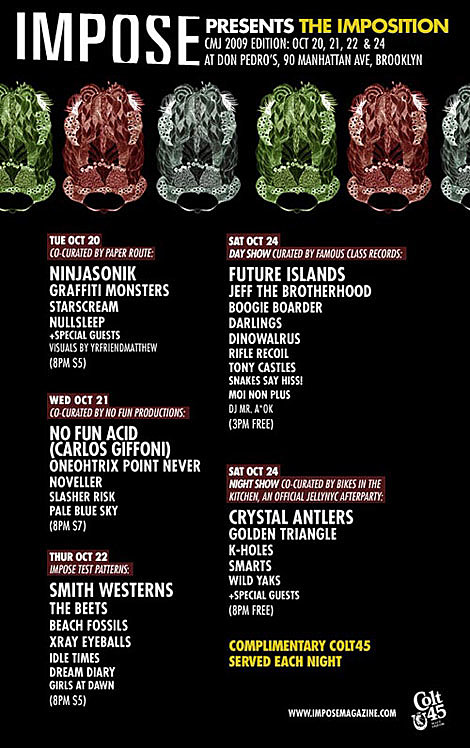 UPSTAIRS:
9pm We Are Wolves
10pm Dan Black
11pm We Have Band
12am Golden Filter
1am Midnight Juggernauts
2am Man Like Me
3am Parallels