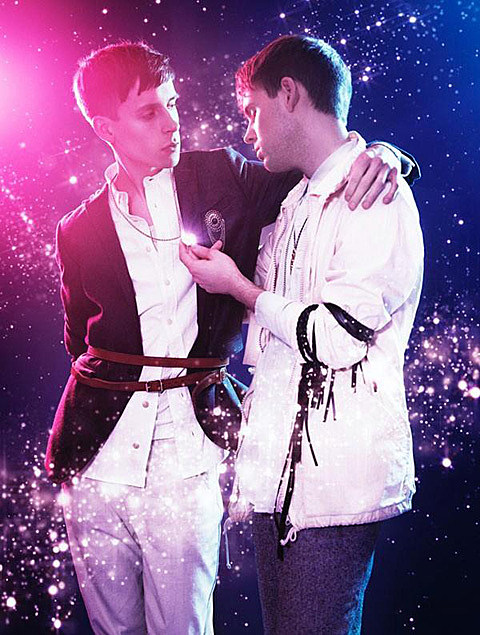 I'm just going to declare Thursday to be the bonkers, overstuffed day at CMJ2010. Even without a badge, you're gonna have to make some tough choices about what you want to do. It would also be a good day to call in sick.

Impose magazine is putting on great FREE unofficial shows all week -- nights at Don Pedros, days at The Woods.  Today's lineup currated by Pop Jew. It's definitely where I'll be this afternoon, and not just because it's four blocks from my house. The whole lineup is great  but above all else,Allo Darlin' is playing at 6PM, a band that has the ability to put a smile on the face of even the most hardened curmudgeon. (Chris Weingarten is currently in Finland so I can't actually prove this.) You would be dumb to miss them. It's one of two shows they're playing at CMJ.

The rest of the line-up is swell too: Bejiing  trio Hedgehog (their drummer is a pint-sized pistol); , Brooklyn's best new indiepop band, Dream Diary;  slacker-ish Bright Lights and local punks The Sleepies and Othermen. Bands start at 2PM and the show is not too crowded so there might be longer sets than you get elsewhere.... and there's a good taco truck in the back. This would make a great warm up if you are going to our night-time showcase at MHOW. Just an idea.

Of course there is good action as always on Ludlow St. At Pianos, I Guess I'm Floating presents two floors of bands, including This Week in Indie faves Violens, Oberhofer and Beach Fossils, plus Baths, Pepper Rabbit (a band I need to check out this week), Teen Daze, Million Young,  Young the Giant, Young Man (that's three "Young"s!), Coolrunnings and more! Bands start and noon. Free entry, free beer.

(note: also catch one of those Youngs, Young Man at our MHOW showcase at 8pm sharp)

Down the street at Cake Shop, it's the NYC Taper day party, with 12 bands in six hours on one stage, which seems pretty ambitious, but that's what CMJ is all about. Overload. The line-up is pretty choice too, including Soft Black, Diamond Rings (one of two day parties for Diamond Rings today), Keepaway, She Keeps Bees, ArpLine and more. First band (Courtesy Tier) is on at 12:30 and if you can't make it, I'm sure all the sets will be up on NYC Taper at some point. Free.

There are also two all-day parties going on. The first I'll mention is the Neon Gold party at Public Assembly which goes from 3PM to 3AM. Pop is the key word here, be it on the guitar side (Obefhofer, Savior Adore, Ava Luna) or the dancey side (Penguin Prison, Fenech-Soler, Brahms, The Knocks). Most interestingly, to me, is that Swedish band The Sound of Arrows is playing their first American show. I didn't even know they played live at all. The band have only released a few singles in their three-year existence, but their track "M.A.G.I.C" (downloadable above) was my #3 Single of 2009. I'm a little skeptical about them pulling it off live, but... might be worth checking out. The Neon Gold website has MP3s of every band playing. Limited badge entry, $12 otherwise.

Then there's Day 1 of Pitchfork's #Offline Fest, which runs from 2pm - midnight, with such bands as Dave Sitek/Maximum Balloon (he's DJing), glitchy UK act Gold Panda, Surfer Blood, Wild Nothing, Small Black and more. While it's hard to question the line-up, almost all of these are all bands are playing many other times during the week, often for free. And while Brooklyn Bowl is an awesome place in theory, it is pretty much insufferable Thurs - Sat nights: the bar is five deep, and half (if not more of) the crowd doesn't even realize there are bands playing at all. And I don't think the weekend conditions will be different because there's a "festival" happening. This will no doubt be the most tollerable of the three nights though, as I said, no arguing with the talent they've got on the stage. 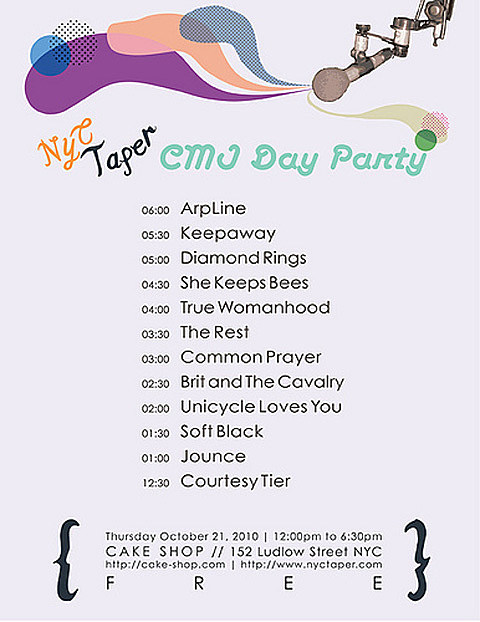 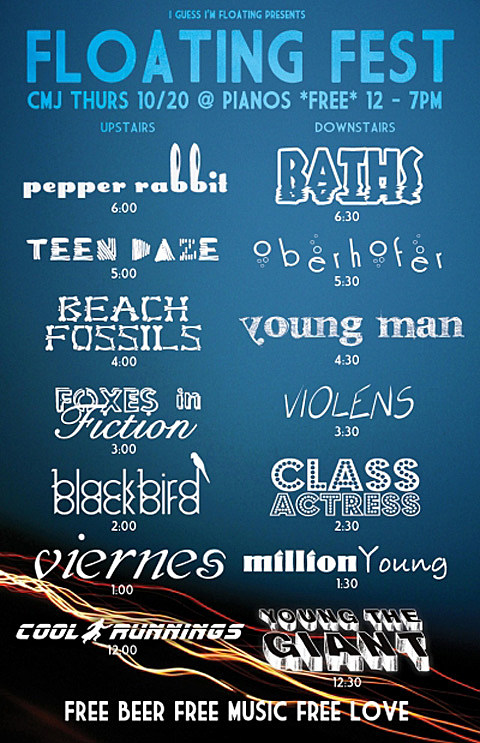 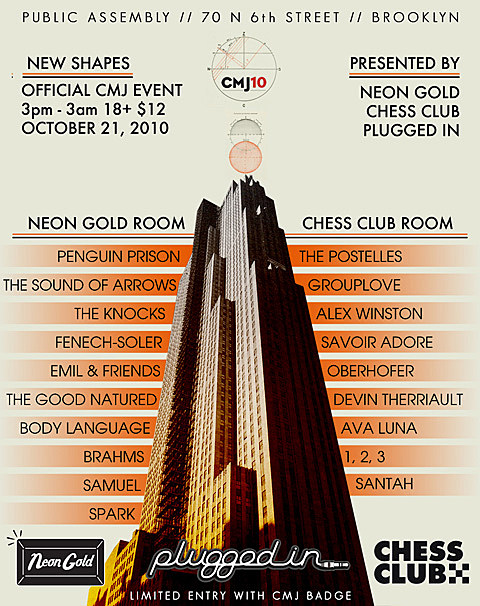 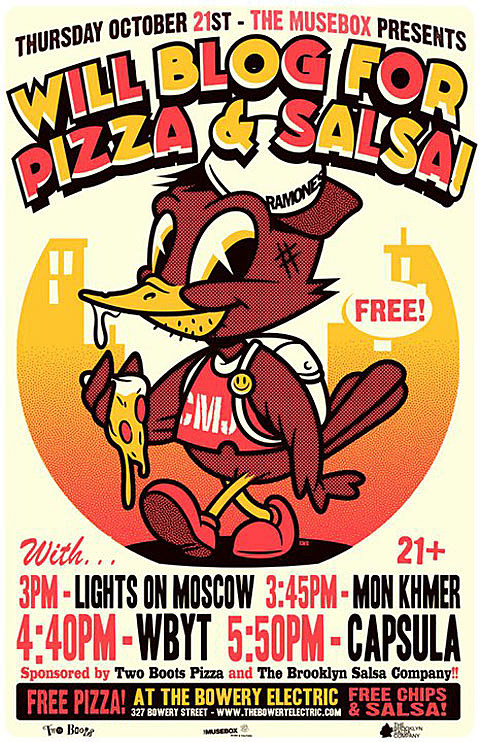 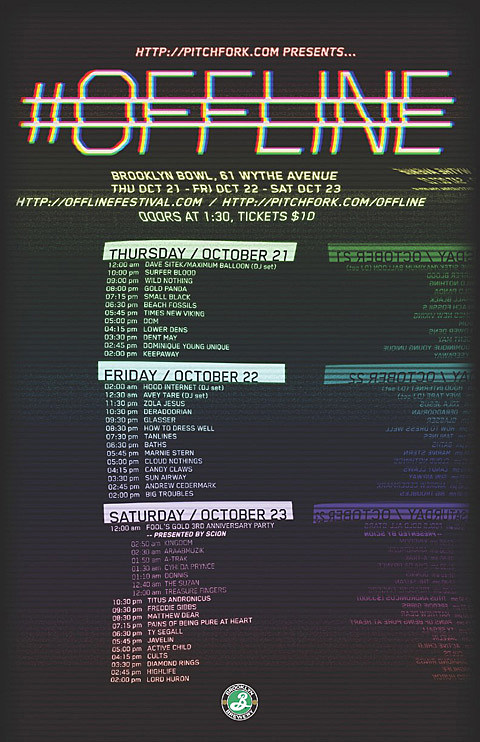